For first time, Walt Disney World guests can pose with an Oscar statuette. 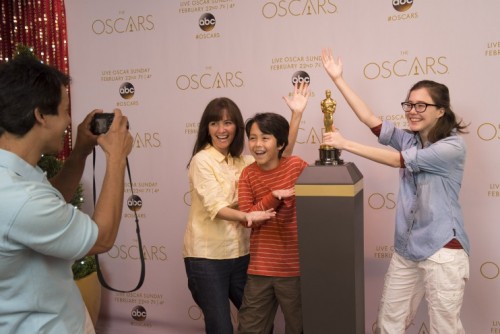 It’s almost time for the biggest night of the year in Hollywood and some of that magic has made its way to Disney’s Hollywood Studios. An actual Oscar statuette has taken center stage inside The Magic of Disney Animation Building for the week leading up to the Academy Awards.

Feb.16 to 22, Walt Disney World Resort guests have a once-in-a-lifetime opportunity to pose for a photo with the Oscar statuette as part of festivities leading up to The 87th Oscars, hosted by Neil Patrick Harris, live on the ABC Television Network on Sunday, Feb. 22 at 7p.m. ET/4 p.m. PT.

This is the first ever “My Oscar Moment” at Disney’s Hollywood Studios. Guests visiting “My Oscar Moment” inside the theme park will be immersed in all of the star-studded backstage excitement as they walk the red carpet to pose with the Oscar against a signature backdrop similar to the one used with A-list stars on the big night.

This exclusive photo opportunity is the first to give Oscars fans and movie buffs the chance to pose with an Oscar and snap a photo since 2012, during the “Meet the Oscar®” event in New York.

2 thoughts on “For first time, Walt Disney World guests can pose with an Oscar statuette.”