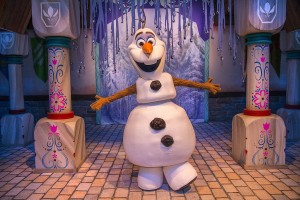 New “Frozen Fun” at the Disneyland Resort (January 6, 2015) Ð The Disneyland Resort introduces spectacular new ÒFrozen FunÓ on Jan. 7, 2015, featuring magical adventures with characters from the Walt Disney Pictures blockbuster film. For the first time in forever Ð and for a limited time Ð the live ÒFrozenÓ experiences will be available in the Hollywood Land area of Disney California Adventure Park. Guests will get warm hugs from Olaf the snowman, build their own snowman in “Olaf’s Snow Fest,” meet Anna and Elsa in an elegant, new location, sing along with the ÒFrozenÓ soundtrack in the Crown Jewel Theatre, and Òchill outÓ at a nighttime, family dance party. In addition, a new ÒFrozenÓ-themed show opens in Disneyland Park Jan. 7, 2015. (Paul Hiffmeyer/Disneyland)