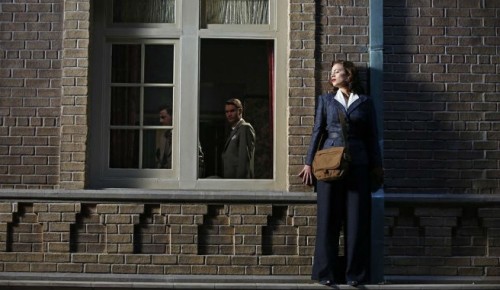 Things are continuing to pick up in this weeks Agent Carter.

The episode begins with Thomson, Dooley and Carter interrogating Dr. Ivchenko. Dooley wants to know about Leviathan but Carter is more concerned about the Black Widow Project – the Russian girls that have been trained to be assassins. Her hunch is that they used Stark’s weakness for women as the means for stealing his tech. Dooley decides it’s enough of a hunch to let Carter pursue it so she reunites with Jarvis and the pair track down all of the women that Stark has been with in the past six months.

Meanwhile, Sousa heads to the prison where they’re keeping the man that Peggy beat up back in episode 2. The man identifies Peggy as the woman who attacked him and then left with Brannis, making the implication that Peggy is a traitor.

Back at the S.S.R., Dooley is continuing to grill Dr. Ivchenko but the doctor gets Dooley to begin to open up about his marital struggles. He also manages to secretly get a message out to Dottie, who is waiting across the street. The way that the message is worded makes me think that the doctor was the one on the other side of the mysterious self-typing typewriter. Ivchenko then begins to subtly hypnotize Dooley but is interrupted by Sousa who’s come to tell the chief what he’s learned about Carter.

Suddenly, there is a city search for Carter that leads them back to the Griffith. In the chaos, Ivchenko has managed to hypnotize another agent into telling him where he can find Stark’s tech and how to escape from the building. He then tells the agent to go enjoy a last drink before committing suicide.

At the Griffith, Peggy has managed to grab the ball containing Steve Rogers’ blood and sneak out of her room before Thomson and Sousa show up. As she’s making her get away, she is stopped by Dottie, who has been ordered to kill Peggy. Dottie distracts Peggy and then kisses her, revealing that she is wearing Peggy’s knock out lipstick. As Dottie pulls out her knife, Thomson and Sousa return. They grab Peggy, handcuff her and take her into S.S.R. custody.

The last moment of the episode is Thomson and Sousa in the interrogation room with Peggy as Dooley says, “Don’t go easy on her just because she’s a girl.” Sousa then pulls out the picture of Peggy with the blonde wig and the ball with Steve’s blood that was in her purse when they captured her. “Let’s get started,” he says as the episode ends.

Lots of things happening in this episode. The doctor is where he wants to be to get Stark’s tech back. Dottie reveals herself to Peggy. Peggy is found out and taken into custody by the S.S.R. Stark is still missing. And there are still two episodes left.