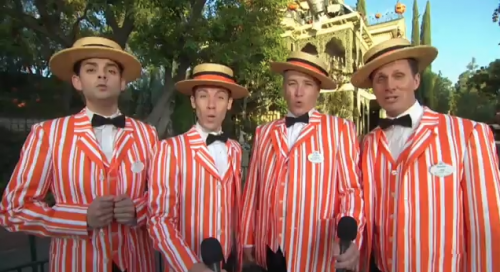 Disneyland continues their semi-regular series of “Every Role a Starring Role” highlighting different positions throughout the resort. This latest video features the sweet barbershop quartet harmonies of the Dapper Dans, one of Disneyland’s longest running entertainment options.

In this video Jim Campbell shares what its like to bring magic to guests through song:

The Dapper Dans have been performing at Disneyland since 1959. There are also similarly named groups at the Magic Kingdom in Orlando and at Hong Kong Disneyland.

I usually stop and listen for at least song or two whenever they’re performing. One of my favorite ways to soak up a little of the magic. Have you ever seen the Dapper Dans perform? Do you have a favorite song that they sing?

3 thoughts on “The Dapper Dans, Musical Harmony Masters of Disneyland”

previousMcFarland Trailer
nextNew clip begins our journey Into The Woods