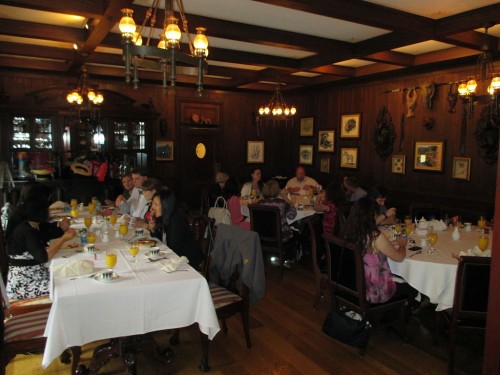 The former Trophy Room of Club 33.

Club 33 is the most exclusive address in all of Disneyland. Home to a ‘secret’ club where members can bring guests, dine, and drink away from the hoy polloi. There’s a long wait list just to become a member, and once you’re invited, there’s a yearly membership fee somewhere north of $11,000 that you have to come up with. All this just for the privileged of access to a restaurant that the normal guest does not have access to.

Depending on what level of membership you have, there are other perks too. You get preferential treatment at a few special events (the recent Candlelight Processional being one), free valet parking at the Grand Californian, and the ability to sign in a certain amount of people a year.

If you own a businesses, it’s a great way to impress a prospective client or entertain existing ones. One membership would provide you with 4 cards, so you could share some of these perks with your friends and family as well.

The exclusive club recently underwent a large renovation. They closed the trophy room to expand the kitchen, and added a jazz club room. Plus there are lots of little magical details added throughout. But you’re still basically paying big bucks just for the privilege to pay big bucks to eat and drink inside Disneyland.

Last week, Platinum Members of Club 33 received a letter from the club saying these benefits would be reduced, significantly. I’m paraphrasing, but the tone was something like this:

Disneyland to Club 33 Members: “We have altered the terms of our arrangement, pray we don’t alter them again.”

Disneyland to member: “Oh yeah, the price is going up too.”

Actually, the members aren’t very happy with the situation and have reached out to complain to local media, like the LA Times.

On one hand, it’s hard to feel much sympathy for the fat cats who still get their exclusive access to the newly renovated club. Disney has a long wait list for Club 33 and they won’t miss any members who drop out of the club.

I’m not a big fan of taking away benefits once given. It would make more sense to grandfather in the existing members and then offer the changed benefits only to new members. That said, Disneyland can do what they want here. If they feel the pain of losing a few members will be minimal, then why shouldn’t they alter benefits?