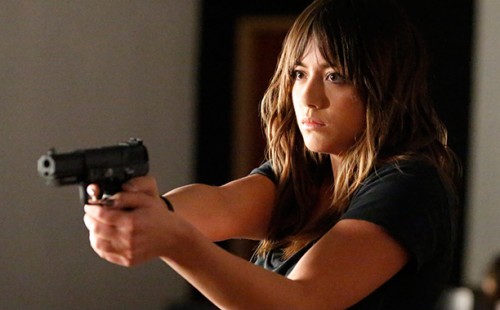 The winter finale of Agents of S.H.I.E.L.D. was full of twists and revelations. The episode continues the build up from last week’s story. Both S.H.I.E.L.D. and Hydra are searching for the Temple in the Hidden City but now that Hydra has Reina they have the advantage.

While Coulson races against Whitehall, Ward brings Skye to her dad which leads to the biggest revelation of the episode. His name is Cal, short for Calvin Zabo a.k.a. Mister Hyde. In the comics, his powers are similar to the literary character for which he is named after. He also has a daughter who is a high ranking S.H.I.E.L.D. agent: Daisy Johnson a.k.a. Quake. She can use vibrations to create earthquake-like effects.

At the end of this week’s episode, Skye, a.k.a. Daisy, has acquired her Quake powers and Reina has also gained her Inhuman powers, though the only hint that we get is some spikes coming out of her face. This is pretty big news for the Marvel Cinematic Universe. It’s the first time we’ve seen an Inhuman on the screen. Eventually, there will be a whole Inhuman movie.

Tripp got caught in the Terrigen Mist as well, but the result didn’t work out for him (though we’re talking about a show whose premise is based on a character coming back from the dead so I’m not convinced that we won’t see him again). Do you think if we start a #TrippLives campaign that he’ll get his own show? It happened before…

You may be thinking that I’m making some assumptions using words like “Inhumans” and “Terrigen Mist” (or that I’m just making up words) because they weren’t labeled as such in the episode, but IGN posted an interview with show producers Jed Whedon and Maurissa Tancharoen where they discuss the Winter Finale and what will be in store when the show returns.

I am really interested in seeing where the show goes from here. What will the show have to do with the movie coming out in four years? Or will it be connected at all? They could just share a name. We may not see Skye or her dad in the Inhumans movie.

What did you think of the finale? Will you be tuning in when the show returns in March? And, are you looking forward to our trip back in time to see Agent Carter in action?