The keen folks over at WDW Magic have gotten their hands on a piece of concept art for a new expansion coming to Disney’s Animal Kingdom. Africa Marketplace will open in Spring of 2015 in the Harambe area of the park. It will be part of a new walkway linking Africa to Asia and contain a new quick service restaurant and additional merchandise locations.

The construction has been occurring mostly backstage for about a year. Overhead shots match up with the concept art and reveal how it will vastly increase the size of Africa. Here’s the new entrance to the area from the walk-way to Asia. 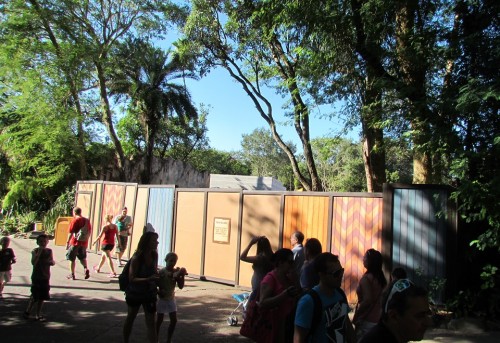 This side will eat a lot of the traffic exiting from Kilimanjaro Safari. The new restaurant will feature multiple windows and a variety of African inspired dishes. With it’s food options, Harambe Marketplace will add some much needed dining capacity to Africa. When Tusker House converted to buffet, that left Africa without a real casual dining location.

Hopefully, the new Africa Marketplace will reduce congestion in the crowded walkways of Harambe. Flame Tree BBQ is geting an expansion. There’s also a rumor that part of Pizzafari will be converted to a sit-down restaurant, so having another counter-service will help.

Avatar-land, Rivers of Light, tons of work on Discovery Island, and an expanded Harambe. There’s a lot going on a Disney’s Animal Kingdom. All it needs now is a lot more ride capacity. Definitely a park to keep an eye on.