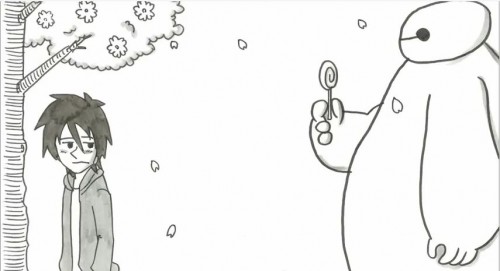 There’s something about hand-drawn animation and its ability to draw up major emotions with just a few curves of a pencil. So, even though Big Hero 6 is computer animated, it’s no surprise Disney turned to an anime inspired look to market the movie in Japan.

The animated trailer was made by Tekken who is a comedian known for emotional flip-book-style anime shorts. The song in the trailer is “Story” by the popular singer AI.

The trailer provides a bit of a backstory for the entire film without giving too much away. It centers on the relationship between Hiro and his brother Tadashi, then moves on to how Baymax cares for Hiro.

Even if you’ve not seen Big Hero 6, get your kleenex ready.

In Japan the film is known as Baymax, owing perhaps to Japan’s slight obsession with robots.