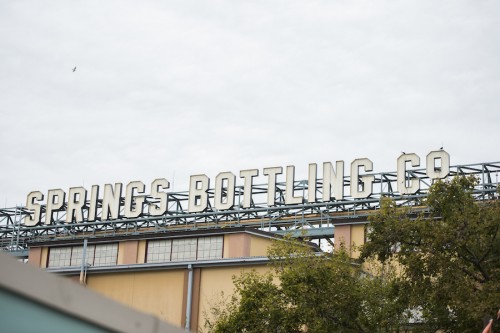 When Disney Springs opens next year, a new sign will light up the night on top of what will soon be Morimoto Asia. The “Springs Bottling Co.” marquee was recently installed. Meant to inspire memories of Florida’s waterfront towns from the turn-of-the-century (last century, not this one) the sign will no doubt become part of the iconography of Disney Springs.

Disney has provided us with a time-lapse video of its installation. These are always fun:

While no new restaurants or retailers have been officially announced, we have learned that the Food Trucks park, now known as Food Trucks at Exposition Park, will open on the West Side later this month. These Disney owned-and-operated food trucks can already be spotted around Downtown Disney, but you’ll soon be able to find at least a few of them regularly stationed in between Starbucks and Bongo’s.

Finally, tomorrow is the first day guests will be able to park in the first of two parking garages to be built for Disney Springs. The West Garage is opening in phases, so not all spots will be available immediately. But it should relieve some of the difficulty in finding parking during the holiday season.