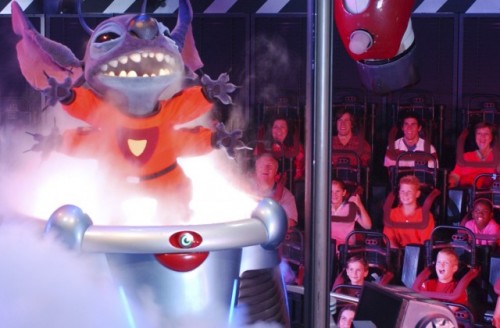 I really can’t believe it, but it has already been 10 years since the Magic Kingdom installed the little blue alien creature Stitch in Tomorrowland and the former home of Mission to Mars and Alien Encounter.

Foxfurr at Passport to Dreams blog is out with the definitive retelling of what led up to the creation of “Stitch’s Great Escape” and the result of Disney’s missed forecast of the attraction’s popularity.

You have to remember than this was going down in 2002 and 2003. The internet was rapidly populating, but was nowhere near the levels its at today. Movie Studios were still ossified in hidebound tradition – there was no concept of “Viral” marketing and the technology was not yet in place to count things like internet hits on videos that could be shared in controlled ways. Lilo and Stitch was a physical media phenomenon. For fairly little money you could go out and buy the movie your friends had told you about, or they could give it to you and then you could go out and buy it and keep the cycle spinning. The drumbeat was increasing right under Disney’s noses. The old guard, in retrospect, over reacted. They ran predictions that, if things continued the way they were, Stitch would overtake Mickey Mouse in popularity.

I think we can all say we’re happy that never happened.

As Foxfurr says, you’re either a fan of Stitch or you put him on the list of all the things that are wrong with modern Disney theme parks. There’s hardly any room in the middle on this one.

Myself, I don’t mind the character, and I think the movie was a gem, but I hate the attraction. I hate all the toon based attractions in Tomorrowland, and I’m glad to know there just might be a solution out there, if Disney ever loosened the purse strings a little bit.

Go read FoxFurr’s excellent blog post, then come back and watch this fan created trailer from 2010. It re-cuts “Lilo & Stitch” into a trailer for a horror movie. How apropos.

What would you do with the space currently occupied by Stitches Great Escape?

previous7 Walt Disney World Upgrades I would like to see.
nextGingerbread Castle at Contemporary Resort Combines it’s a small world and Frozen