Tokyo Disneyland Renovation may Freeze out It’s A Small World 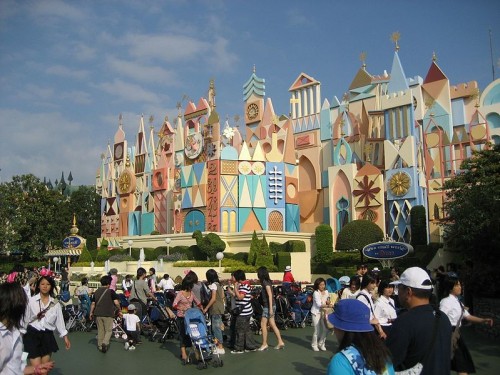 A story in the Nikkei Asian Review reports that Tokyo Disneyland is about to undergo a partial renovation that will introduce a large attraction based on Disney’s mega-hit Frozen. As part of the construction, that park’s version of “It’s A Small World” may get moved to make way for the Frozen attraction. There’s also a possibility that Arendelle will appear in Tokyo DisneySea instead.

I read the article with great interest because I had the exact same idea for Walt Disney World. Get ready for what some may consider the ultimate heresy from a Disney Fan. I think the rumor is a great idea. Not just for Tokyo Disneyland, but for the Magic Kingdom as well. Moving “It’s A Small World” from its place along a congested walk-way inside the Magic Kingdom’s Fantasyland, to some place where it can have a more pastoral opening and get the great facade like at the original or in Tokyo Disneyland, would be fantastic.

Ever since Disneyland neutered the pure commercial free message of original version of the attraction with a Disney character overlay, all the other versions of “it’s a small world” are candidates for refreshers.

Heck, why not give passengers laser guns and put target on each of the doll. Guest interaction. It’s the latest thing in immersive entertainment. Movie trailer voice: “In a battle for WORLD PEACE, only Walt Disney’s Frozen Head can guide the way. It’s A Small World, Revenge of the Guest, Part 2”

Obviously, I’m not serious about the guns.

Frozen, which I believe will fit in fine in Norway in EPCOT, is still more naturally suited to Fantasyland in the Magic Kingdom. Moving “it’s a small world” would give Imagineers a huge footprint to work with for an amazing original Frozen themed attraction. The Norway version will always be little more than an overlay as long as they’re forced to work with the footprint and ride mechanism of the Norway boat ride.

My nomination for it’s a small world’s new home? EPCOT World Showcase. Use it as a portal to the World Show Place pavilion and invite dozens of smaller countries to show off their culture at EPCOT even if they can’t afford a full-sized pavilion. Or place it between Germany and America. That side of the park needs some more child friendly options anyway. Another strong argument for EPCOT is that moving it to the World Showcase would honor IASW’s original debut at the World’s Fair.

The original flavor and appeal of “it’s a small world” should be maintained in any move. The world is both a lot bigger since the original version opened (with a deeper appreciation of cultural diversity) and smaller (communications and improved standards of living have brought everyone closer). Those changes should be gently worked in to the story of global peace being a real possibility today if we work hard and place the children of the world’s future first.

And that’s a message we could hear a lot more often these days.

Hat tip to Jim at Westcoaster for finding the news article.
(photo credit Stevec240 at the English language Wikipedia, via cc-attribution-share alike 3.0 license)