I have been very interested in Marvel’s new Disney Kingdoms comic title and enjoyed what I’ve read so far.

Their first story was a supernatural adventure about the conceived but never built Museum of the Weird called, well, Seekers of the Weird.

They followed that up with a surprisingly popular steampunk story about the origins of Figment and the Dreamfinder.

Disney Kingdom’s next trip is out to the Wild West as they explore Big Thunder Mountain Railroad.

“Diving into the background ref that the Imagineers supplied, I was intrigued by a young female character mentioned in the Disneyland Paris version of the attraction that I thought would make an exciting protagonist,” said editor, Bill Rosemann. “Once the Imagineers agreed, I knew Dennis [Hopeless, writer] and Tigh [Walker, artist] – who did such amazing work with their teen cast when we worked on Avengers Undercover – would be the perfect fit for this.” 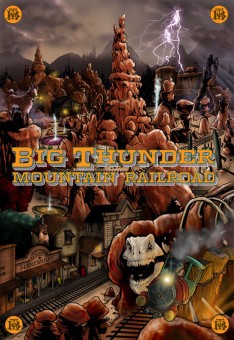 Hopeless talked about his interest in the project. “I loved the idea of a Gold Rush Western that’s also a larger than life Disney adventure…The Old West is such a cool setting and we get to do the full throttle, no brakes version.”

So, what will the story be about? Hopeless continues: “Our hero is Abigail Bullion, the teenage daughter of Big Thunder Mining Company owner, Barnabas T. Bullion. Abby moves to Big Thunder after her mother’s death and finds her gold-obsessed father locked in battle with a mountain. Winner keeps the gold. Abby will have to pick a side before her father’s greed and nature’s fury conspire to destroy the town and everything in it.”

There have been two interesting revelations about this project. The first is that issue #1 for Big Thunder Mountain Railroad isn’t coming out until March 2015 even though the Figment story just finished its run.

The other revelation is that all of the Disney Kingdom stories are interconnected. “That’s right,” reveals Rosemann, “The adventures may be taking place during different time periods, but it’s our intention to create a cohesive ‘Disney Earth’ where all of these stories are taking place.”

Every parallel dimension in Marvel’s comics occurs on a different earth (it can get confusing). For example, the main Marvel stories take place on Earth 616 and the Ultimate Marvel line takes place on 1610. Even the Marvel Cinematic Universe has a parallel Earth designation, though that information is only known by people who invest way too much time in these things (coughEarth-199999cough).

As confusing as parallel Earths can be, I like that are creating one for the Disney Kingdoms. Now, that line of comics isn’t its own things and opens up other possibilities, like having some of Marvel’s heroes travel there….for a vacation, of course.

Have you been reading the Disney Kingdom stories? Is a Big Thunder Mountain Railroad story enticing enough for you to start?