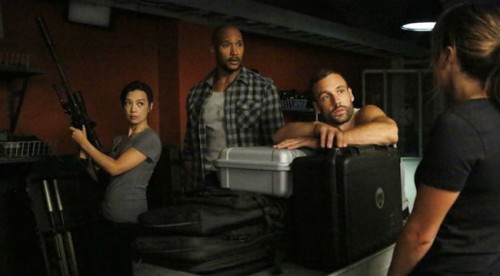 This week’s episode was a reunion for a few of the characters. We, the audience, were reunited with Simmons who is, happily, not working for Hydra. Fitz and Ward are reunited, which almost ended in Ward’s demise. And, the team is reunited with Donnie Gill. His ice powers are increasing and he holds a grudge against Hydra, though I think he should just let it go (sorry…no more Frozen puns). To be fair, I would hold a grudge too if I’d been brainwashed.

It was good to see what Simmons has been up to this season and to see that she is still on the side of good. And Fitz is showing some growth as well when he tells imaginary Simmons, “You’re not even here.” Though there is some darkness inside him as evidenced by how he almost killed Ward.

I enjoyed the dynamic and banter between Hunter, May and Tripp. It will be interesting to watch Hunter as he figures out where his loyalties lie.

I don’t think that this is the last we’ll see of Donnie despite his apparent demise. A popular manta in comic books is, “No body = no death.” And the introduction of Agent 33 could be an interesting one.

Here’s our first look at Episode 4: I Will Face my Enemy.