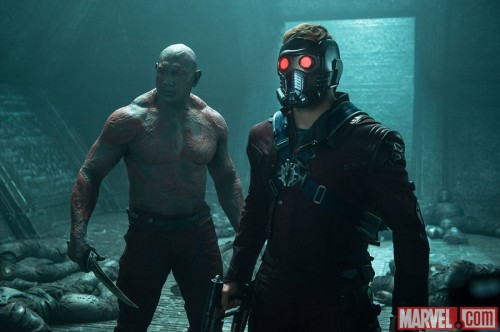 Disney is dominating the 2014 box office owing especially to Marvel’s Guardians of the Galaxy continued strong performance. In fact, it has now been number one at the box office for more weekends that Marvel’s The Avengers. In fact, the only other movies in the last decade to hold first place for four weekends were The Dark Knight, Avatar, and The Hunger Games. That’s a nice neighborhood to be in at the box office. Guardians is also unique in that the four weekends weren’t consecutive. They actually lost first place one weekend to TMNT, but then audiences quickly figured out that Guardians was a much better film and rewarded it with three more first places weekends.

The hit movie is now just $5.4 million from passing $300 million domestically and it just reached $586 million world wide (which is more than the original Iron Man made in its whole run). Look for those totals to continue to grow as Guardians of the Galaxy opens in Japan this week. It still hasn’t opened in Italy or China, which is expected to give the box office total another boost.

Check out how Marvel’s Guardians of the Galaxy is being marketed in Japan in these hilarious trailers:

Director James Gunn has said that he’s now in the process of writing the sequel, which he will also direct. Which characters do you want to see most in the sequel?