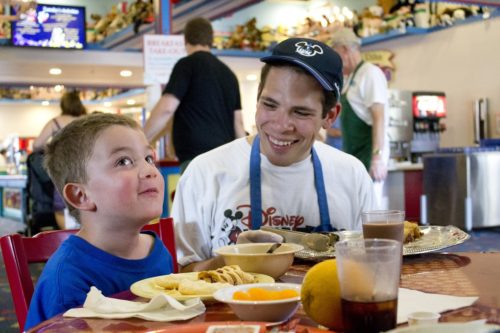 Each year Disney’s community of volunteer cast members head back to the communities where they live and play and help charities and nonprofits that are near and dear to their hearts. These “VoluntEARS” spend countless hours on community initiatives such as mentoring students, organizing donations at local food banks and advancing adult literacy. In recognition of their service, Walt Disney World Resort will be giving more than $1 million to Central Florida nonprofits.

This year, The Walt Disney Company awarded more than 1,500 EARS to You grants to local nonprofits in honor of the 308,000 hours of community service donated by Cast Members in 2013. VoluntEARs who provide at least 10 hours of service are eligible to apply for EARS to You grants, which are financial contributions of up to $1,000 to the nonprofit organization of their choice. Recipients include Give Kids the World, the Pet Alliance of Central Florida (formerly known as SPCA of Central Florida), A Gift for Teaching, and Central Florida Community Arts.

“By opening their hearts and devoting their time to local community groups, Disney VoluntEARS make Central Florida an even better place to call home,” said Nancy Gidusko, director of corporate citizenship for Walt Disney World Resort. “We’re proud of our Cast Members’ service and humbled by their dedication to our community.”

In addition to these financial contributions, Disney celebrated more than 800 Cast Members who earned the President’s Volunteer Service Award, which salutes Americans who donate more than 100 hours of annual community service. VoluntEARS who have earned this designation were recognized by the White House with a commemorative pin and congratulatory letter from the president.

As a company with nearly 70,000 Disney Cast Members who live and work in Central Florida, Walt Disney World Resort is committed to investing in its local community. In 2013, the company donated $36.5 million in cash and in-kind support to local nonprofit organizations. Disney is focused on improving the quality of life in Central Florida, with a special interest in helping children and families.