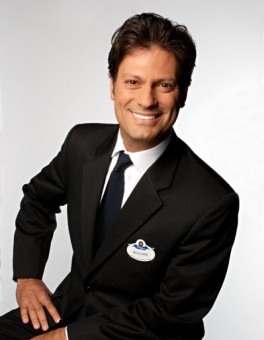 Although things are not perfect at Disneyland Paris, it’s no question things are a lot better today than they were 4 years ago. A lot of that is owed to the leadership of Philippe Gas. It makes sense that Disney would want him at their newest property to make sure it doesn’t fall into the same traps that befell the Paris resort. So it was no surprise when Walt Disney Parks and Resorts announced yesterday that it named Philippe Gas general manager of Shanghai Disney Resort, and promoted Tom Wolber to replace him at Disneyland Paris.

“One of our greatest assets is the global strength of our teams,” said Tom Staggs, chairman of Walt Disney Parks and Resorts. “Both Philippe and Tom are seasoned Disney veterans with a tremendous combination of leadership skills, business acumen, and international experience that will help ensure that we carry on our legacy of creating unforgettable experiences for our guests. They bring an incredible depth of operational experience to their respective roles and are well positioned to contribute to the future success of Shanghai Disney Resort and Disneyland Paris.”

Gas has more than two decades of experience in a number of key leadership positions around the world, including significant experience throughout Asia-Pacific where he led human resources for The Walt Disney Company, overseeing the strategy for thirteen countries in Asia. Under his leadership as président of Euro Disney S.A.S., Disneyland Paris solidified its position as Europe’s most popular tourist destination. Philippe oversaw the renegotiation of the land development plan between the resort and the French state and helped finalize the partnership for Villages Nature, Europe’s leading eco-tourism destination. Throughout his career, Gas has maintained strong relationships with government and community partners.

Wolber returns to Disneyland Paris, which he helped to open in 1992 and brings more than 20 years of wide-ranging operations experience including leadership positions at Disney Cruise Line, Disney Vacation Club and both Walt Disney World Resort and Disneyland Paris. He most recently served as the head of Walt Disney World Resort and Transportation Operations, overseeing all of the 28 resort hotels and the property’s extensive transportation network. He has also overseen a number of complex expansion projects, including the successful launch of the Disney Dream and Disney Fantasy cruise ships and was instrumental in the Disney Springs master plan and the continued growth of Walt Disney Parks and Resorts’ sports business.

Disney continues to focus on Asia for expansion of its customer pool. That park is definitely getting all the new toys. Now it’s getting a great manager to lead it. Should be a perfect mix for Disney. As for Wolber in Paris, I wish him luck.

Both appointments are effective in September.