We’ve been teased, we’ve been smothered in cute, and we’ve been introduced to the main characters of the movie, now it’s time for Disney marketing to let loose the hounds and really start promoting their next animated feature “Big Hero 6,” which is inspired by a Marvel Comic of the same name.

Released today is the first big trailer for the movie. In it, we get our first look at the movie’s villain – Yokai and a hint of the action that brings the friends together to try and save the day. Plus more Baymax, who is on pace to steal the show with cuteness.

I like that the movie doesn’t have that comic book style, nor does it really have a style that resembles any previous Disney animated feature. It’s kind of a cross between Miyazaki, Chris Sanders (Lilo and Stitch) with a small dose of Pixar thrown in (especially on the secondary characters).

We also have our first easter egg. Look on the back wall behind the police officer right around minute 1:15 in the trailer for a glimpse of a familiar face. Can’t see it? The answer is below the jump

Yep. It’s Hans from Disney’s Frozen. He really is a baddy. 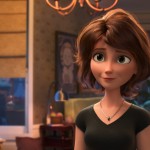 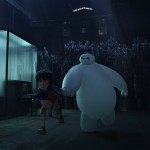 Update: Here’s the Japanese trailer for the film, in which the characters speak Japanese, so it may be hard to follow. But there are a few emotional new scenes that set up the story of the death of Hiro’s big brother and role model – Tadashi.

“Big Hero 6” is the 54th feature film from Walt Disney Animation Studios. Inspired by the Marvel comics of the same name, and featuring comic-book style action, “Big Hero 6” is directed by Don Hall and Chris Williams, and produced by Roy Conli.

Disney veteran Don Hall helmed 2011’s “Winnie the Pooh” and has earned screenplay and/or story credits on Disney features, including “Meet the Robinsons,” “Tarzan” and “The Princess and the Frog.” Chris Williams directed the 2008 feature “Bolt,” as well as the short “Glago’s Guest.” Williams was a key member of the “Mulan” story team, and was nominated for an Annie Award for outstanding individual achievement for writing in an animated feature presentation for his work on “The Emperor’s New Groove.”