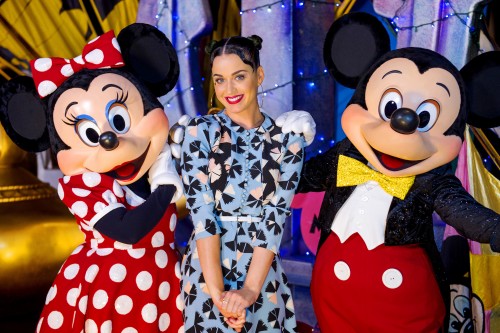 We previously brought you the official photos and video of Katy Perry, on vacation at Walt Disney World over the fourth of July weekend. She met Mickey & Minnie and talked on video about how Walt Disney influences her creatively. But Perry did not visit Walt Disney World alone, she spent some time in Cinderella Castle suite, had a special party, and toured all four theme parks with her friends, band mates, and family.

Along for the journey was her friend and photographer Rony Alwin who captured the fun on film. Now, some of the photos are what I would label “DFWTM” as they show backstage areas or use flash on dark rides (we all know how annoying that is, right), but if you can overlook the few transgressions, it’s a fun look at some areas us day guests don’t normally get to see and a glimpse into the life of a celebrity at Walt Disney World.

The first set of photos are in the Prop Shop at Disney’s Hollywood Studios, a room that can be rented out for private events. See if you can tell where the other photos are taken!