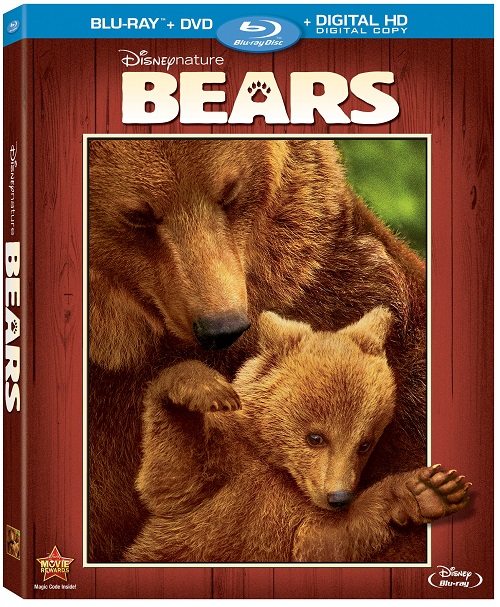 Get ready for a journey to the Alaskan wilderness without leaving home as Disneynature’s Bears Digital, DVD and Blu-ray Combo Pack is now available for pre-order! An epic story of breathtaking scale, this heartwarming and visually spectacular film showcases a year in the life of a bear family as two impressionable young cubs are taught life’s most important lessons. Bonus features include the music video for “Carry On” featuring Olivia Holt and four making-of featurettes.

If you missed the movie in theaters, you’ll be happy to know that Disney is continuing its program of releasing a portion of first-week sales to be be donated to the National Park Foundation as part of the Disney Worldwide Conservation Fund to Protect Wildlife and Wild Places. So your pre-order today helps both wildlife and The Disney Blog and we thank you.

I’m very happy to see Disney continuing its tradition of true-life adventures. I think it’s the perfect offering for the whole family.

More details on the DVD and Blu-Ray are below the jump in the original announcement: To celebrate the in-home debut of “Bears,” Disneynature is proud to continue the conservation program initiated with the film’s theatrical release. For every purchase of the movie through August 19, 2014, Disneynature will make a donation through the Disney Worldwide Conservation Fund to the National Park Foundation, the official charity of America’s national parks, to further protect and conserve endangered or threatened wildlife and wild places as well as enhance field research across more than 2.9 million acres of National Park Service land.

Bonus features on the “Bears” Blu-ray™ Combo Pack, and Digital HD include the music video for “Carry On,” featuring Olivia Holt, and four making-of featurettes, including “Welcome To Alaska,” which tracks the filmmakers as they set forth on an epic journey to film Sky and her cubs out in the wilds of the Alaskan frontier; “The Future For The Bears,” which spotlights a special visit to the film’s production from legendary primatologist and conservationist Jane Goodall; “A Guide to Living With Bears,” which introduces viewers to the guides who instructed the filmmakers on how to work with these magnificent creatures; and “How Did They Film That?,” which provides an inside look on some of the extreme filmmaking that went into getting shots high in the mountains and under frigid cold water.

This must-own Disneynature true life adventure can be experienced in the following formats with bonus features as listed:

Bonus Materials for This Product:

Welcome To Alaska – Journey with the filmmakers into the Alaskan wilds to film Sky and her cubs.

The Future For The Bears – Experience the thrill of living with the bears during production, and the importance of protecting the wilderness to ensure their survival…and our own.

A Guide To Living With Bears – Learn how the team interacts safely with these magnificent creatures.

How Did They Film That? – Get an inside look on some of the extreme filmmaking that went into getting shots high in the mountains and under frigid cold water.