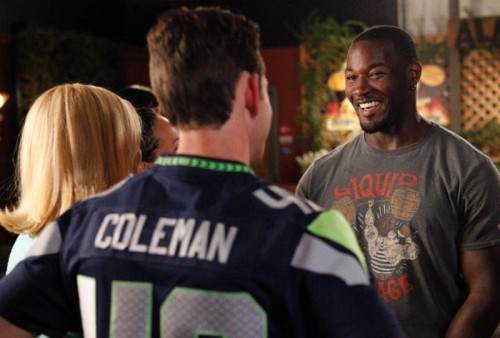 A special guest star will appear on tonight’s episode of “Switched a Birth.” I think he’s special, at least, since he comes from my team, the Super Bowl Champion Seattle Seahawks and since I run this blog, I get to say so.

On tonight’s show, Emmett gets unexpected news when he and Bay attend his father’s housewarming party. When she discovers Melody is considering an out-of-state move that would take Emmett with her, Bay encourages Emmett to strengthen his relationship with his father. But a visit with Emmett’s dad reveals news that may change their relationship altogether. Kathryn and John clash with Regina over funding Daphne’s college expenses, while Daphne interviews for a Latina college scholarship.

Meanwhile, Mary Beth surprises Travis when she tracks down his hero, Super Bowl Champion Derrick Coleman, at a local restaurant.

Yep. Lot’s of drama. But that’s part of what makes Switched at Birth one of the top rated shows for Disney’s the ABC Family Channel. Are you a regular watcher?