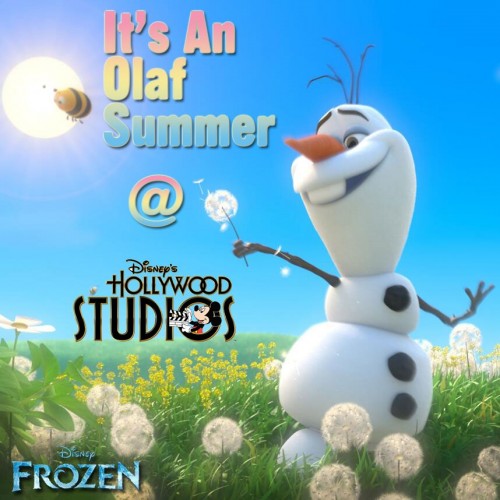 I visited Disney’s Hollywood Studios on Monday and took in their 6-8pm concert party “Rock Your Summer.” It was fun and attracted a small crowd. But obviously not doing it in terms of drawing a significant audience As rumored, Disney just announced they have assembled new Frozen themed fun for the rest of the summer. Here are the details:

Olaf on Summer Vacation – Olaf the snowman is having the time of his life on his very first summer vacation! He chimes in throughout the day to keep everyone updated on all his adventures. Plus, you can pick up your very own Take-Along Olaf from locations in the park, so he can join you on your summer vacation. And when you share your photos with Olaf on social media, be sure to tag them with #OlafSummerVacation. They may just get selected to appear in that day’s grand finale!

Anna and Elsa’s Royal Welcome – At 11:00 a.m. each day, Elsa and Anna arrive in Hollywood as part of their goodwill tour of neighboring kingdoms, making their way down Hollywood Boulevard in a horse-drawn sleigh. Kristoff is along for the fun, too, joined by a flurry of skaters, skiiers, ice cutters and more! The entire procession culminates in a special moment at the Sorcerer’s Hat Icon Stage to officially welcome the visiting royalty to this kingdom of Hollywoodland.

For the First Time in Forever: A “Frozen” Sing-Along Celebration – Cool down inside the Premiere Theater, where Anna and Elsa join the Royal Historians of Arendelle for a fun and comedic retelling of the unique history of their Kingdom, filled with delightful, sing-along moments from “Frozen.”

Wandering Oaken’s Trading Post & Frozen Funland – Inside Soundstage One, Oaken and his cousins have created a Frozen Funland filled with cold weather activities, unique photo opportunities, and more! There’s a frozen pond with ice skating demonstrations, wintertime fun for kids in the “Do You Want to Build a Snowman?” play area, a “big summer blowout” with plenty of “Frozen” merchandise, and special “Frozen”-inspired food and beverage offerings.

“Coolest Summer Ever” Dance Party – Starting at 5:30 p.m. each day, a dance party takes over the area around the Sorcerer’s Hat Icon Stage, with a DJ, live band, and more! The band plays a variety of classic and contemporary summer rock & roll hits, as well as a cool, rocking medley of “Frozen” favorites. It’s going to be hot!

“Frozen” Fireworks Spectacular – Everything wraps up at 9:45 p.m. when Anna, Elsa, Kristoff, and Olaf come together at the Sorcerer’s Hat Icon Stage for a grand finale to the day’s festivities, kicking off an awe-inspiring fireworks display set to the glorious music of “Frozen!”

If Disney does this right, it could be at least some what of an answer to the opening of Harry Potter’s Diagon Alley at Universal Orlando. It may not prevent every guest from taking a day to visit Harry Potter and friends, but the popularity of Frozen, should slow the flow at least a bit. Which, I am sure, is the goal.

The plan is to get it all up and running by July 5th.