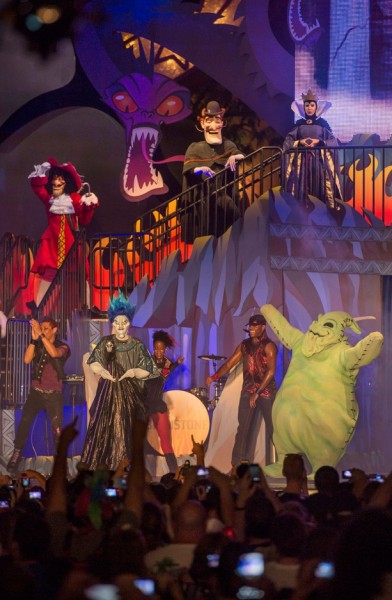 Last year Walt Disney World has the great idea to hold a Villains themed party at Disney’s Hollywood Studios. The event on Friday the 13th, was a disaster. As it was included as part of regular guest admission, every passholder and their sister with in a few hours driving distance of the park made a bee-line for the park causing massive traffic jams and the park to reach capacity. The park was so bad, many guests left, then found out that they were stranded in the parking lot as hotel buses couldn’t make it to DHS, since they were stuck in hours long traffic backups on the roads. And that was just the tip of the iceberg.

Of course, the idea was great and many guests did manage to have some fun interacting with their favorite villains, enjoying a few treats, etc. This year Disney is doing a similar event – Villains Unleashed, but with much more control in mind. In fact, it will be a hard ticket event requiring separate admission from regular park tickets.

There will be more than 50 villains involved in the evening. Plus the popular “Hades Hangout & Dance Party,” “Oogie Boogie’s Variety Show,” a Star Wars villain zone, a new “Villainy In The Skies” fireworks spectacular, a villain-inspired pre-show to “Fantasmic!”, face painting, specialty food & beverage, event merchandise, and more. Guests are also being encouraged to dress up in a suitably themed costume.

As we mentioned above, the Villains Unleashed party (similar to Mickey’s Not-So-Scary Halloween Party and Mickey’s Very Merry Christmas Party) requires a separate ticket for admission. Adult tickets cost $67 plus tax and children ages 3-9 cost $62 plus tax. Annual Passholders and Disney Vacation Club Members can book their tickets now. All other guests can book beginning June 9. To book, call 407-939-1933 for APs and 800-800-9800 for DVC Members.