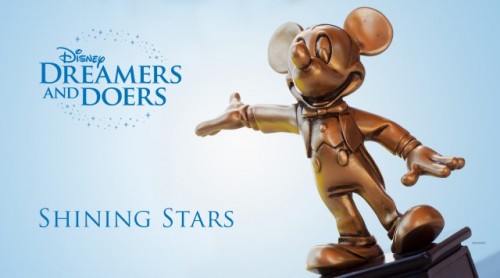 Making a difference through their kindness and hard work, Disney Dreamers & Doers consistently demonstrate outstanding character and lead by example. Students selected for the Shining Star distinction include a second grader who befriends and assists disabled students, an eighth grader who created a documentary promoting South African girls’ education and a high school senior whose guidance in fitness and nutrition helped a friend lose more than 100 pounds.

“Here at Walt Disney World Resort, we continue to be impressed by our community’s youngest citizens and are inspired by the positive impact they have on Central Florida,” said Nancy Gidusko, director of community relations for Walt Disney World Resort. “Through compassion, vision and hard work, these dedicated students act on their dreams of changing the world.”

Approximately 400 students were chosen by their schools for this distinguished award. From all the 2014 Disney Dreamers & Doers named, a panel of judges selected the 15 Shining Stars from elementary, middle and high schools in Lake, Orange, Osceola, Polk and Seminole counties. In its 31st year, the Disney Dreamers & Doers program has recognized nearly 13,000 students since the program began.

Disney Dreamers & Doers Shining Stars receive a Mickey Mouse statue known as a “Mousecar,” a gold medallion and annual theme park passes for themselves and their immediate family.

Join us below the jump for a list of the shining stars and their inspiring accomplishments:

When new school construction necessitated K-12 students sharing a common campus, Belle Orser found herself constantly picking up litter. Concerned the trash would attract biting ants or make a snapping turtle sick from eating garbage, Belle bravely approached the high school principal. After hearing her concerns, the principal invited her to speak at a middle and high school assembly to inform students how littering was affecting her friends, school and the environment. Because of Belle’s actions, students are now committed to a clean, safe and environmentally friendly campus.

When his cousin was diagnosed with leukemia, Scout Updike decided to pair his love for baseball with helping families affected by childhood cancer. With the support of his team, Scout has raised more than $20,000 through auctions, raffles and t-shirt sales. The fundraising helps with his family’s hospital bills, while the cancer ribbons his team sports on their jerseys and caps promote their hope for cancer-free childhoods for all kids. A teacher has praised Scout’s leadership and maturity, as well as his youthful enthusiasm for the cause.

After her parents “went their own way” when she was just eight years old, Angelea Mulkey moved in with her grandmother and took on a mothering role for her brother. Today, Angelea works an after-school janitorial job to help with family finances. Each day after school and work, she prepares dinner to ensure the family eats together before the focus turns to homework. Believing her current sacrifices will make her strong for the future, Angelea dreams of becoming a lawyer. In addition to her academic dedication, teachers commend her willingness to accept difficult challenges and overcome obstacles.

After losing her mother, Averyan Minor stepped up to “keep things as they are supposed to be” at home and take care of her father and little brother, who looks up to her. Each day, she picks out her brother’s clothes for school, helps him with homework and makes time to think about her mom. With the guidance of her family and teachers, Averyan has worked hard to improve her grades so she can make her mother proud by becoming a doctor. Averyan’s teachers say that although losing her mom has been difficult, she has grown in strength and character.

As a young child living in a motel, Topanga Sena struggled academically. But with the help of her teachers, Topanga improved her grades and was inspired to help younger children learn to read and have access to books. Through her own “Dare to Care” program, she organizes book drives for children living in homeless shelters, where she also volunteers. Besides her focus on reading, Topanga has helped organize school gardens to teach fellow students about healthy living. According to her teachers, she makes helping others a top priority, despite the challenges she has faced in learning and life.

Teachers say Charis Watler “exudes determination and resilience.” After losing their home following the 2008 economic downturn, Charis’ family lived in a shelter, which she found “terrifying.” But through the kindness of fellow residents, Charis began to feel more comfortable and appreciated the care her family received. Inspired by their compassion, Charis began tutoring the shelter’s younger children and working hard to set a positive example. Encouraged by the feeling that she’s “helping make the world better,” Charis dreams of becoming a teacher to continue giving back.

Convinced that “kids can make a difference,” Kayla Domres donates her time and money to a variety of charities that help children and families. Examples of her efforts include growing her hair for four years to be cut and donated to children suffering hair loss due to cancer. She also made crafts – such as salt dough creations, duct tape pens and rainbow loom bracelets – to sell and raise money for a children’s hospital. Described by her teachers as a leader, Kayla plans to spend her life helping those in need.

With the goal of becoming a physicist, Calvin Bidinger wants to be a Dreamer and Doer in the scientific community, creating ideas that will benefit the environment. During his free time, Calvin experiments in search of a source of clean, unlimited power that would eliminate power outages and electric bills. He recently won first place in a university physics competition, where judges encouraged him to keep working on his concept. Admiring his curiosity, Calvin’s teachers praise him for being a leader, rather than a spectator, in science education.

Originally from Jamaica, Chante Maitland registered for a dual-enrollment program that enables her to take college courses while in high school. Each day, Chante walks 40 minutes between schools, but believes it’s worth the sacrifice. With memories of fellow Jamaican students who couldn’t afford school lunch and an educational system that ended with high school, Chante is grateful for her access to education and encourages peers to appreciate their opportunities. A community service leader, she sets a positive example by volunteering with terminally ill children and tutoring students in math. Teachers applaud her dedication to education and passion for her community.

During the 12 years Hector Guzman’s grandmother has spent raising him and his five siblings, she has suffered from heart disease and health complications. To help care for her and ease the family’s financial burden, Hector has taken on responsibilities at home, as well as jobs such as mowing lawns and pressure-washing houses. He also cleans the house, maintains the yard and even changes diapers, although he admits it’s “not fun.” In spite of the many obstacles he faces, Hector is praised by teachers for his strength, compassion, charisma and eagerness to learn.

On a recent trip to South Africa, Juliana Ryan discovered that 80 percent of the country’s girls are not enrolled in school, making them vulnerable to poverty and human trafficking. Juliana has become an ardent advocate of girls’ education, supporting a nonprofit that connects women around the world through fair trade enterprises. With the goal of raising awareness about the cultural pressures women face around the world, she created a documentary to share her experiences with her peers. Juliana’s teachers say she radiates compassion, thrives while serving others and hopes to help change the futures of women worldwide.

Using his expertise in fitness and athletics, Floyd Croka created a training and nutrition program that helped a friend overcome weight challenges leading to high blood pressure and diabetes. After a 10-month regimen, his friend lost nearly 100 pounds, inspiring Floyd to further develop his skills in fitness training and coaching. He began helping fellow classmates, teachers and community members, creating a strength and conditioning program for his school’s baseball team and offering personal training to staff and faculty. Floyd’s teachers praise the guidance and emotional support he offers in his school and community, and encourage him to continue making a difference in the health and lives of others.

Known around his school for his caring, helpful attitude, Jacob “Rocco” Petrazio is described by teachers as a leader and role model for younger students. When asked to sit with a classmate who was feeling lonely, Rocco did his best to make the student smile and the two later became good friends. He also helped a student who uses a wheelchair at an after-school activity, ensuring he could participate and not feel left out. When he thinks about the future, Rocco says he hopes to help find cures for those who are ill or disabled, because he feels everyone deserves to have fun and be happy.

When she was a 12-year-old, Chloe MacFarlane’s father was deployed to Afghanistan. Inspired by the challenges facing children there, she began making boxes of clothing, backpacks and school supplies for the country’s orphans. Two weeks after her supplies arrived, the MacFarlane family received news of their dad’s death. Though devastated, Chloe remained dedicated to America’s military families. She volunteered with a group that bakes cookies for deployed soldiers, makes wreaths for the fallen and sends gifts to kids who have a parent in military service. Chloe’s teachers admire her commitment to helping others, even after her family’s tragedy.

Anastasia Parker believes that in life, we must all learn to play the hand we are dealt. She was dealt difficult cards – a learning disability and the loss of her parents. Not expected to live past her teens, Anastasia is thriving and determined to make her parents proud by helping others. Through her work with an organization that pairs students with and without mental or physical disabilities, she helps promote friendship and understanding. Known among her teachers for leaping over her life’s obstacles, Anastasia is described as tenacious, driven, intelligent and a champion.
dpuf
Disney Dreamers & Doers is just one of the ways that Walt Disney World Resort actively supports education in Central Florida. During the past year, Disney’s involvement has included Disney Grants for local school districts and early learning coalitions, more than 18,000 hours donated by Disney VoluntEARS at local schools and nearly 3 million school supplies donated to students at the start of the school year.