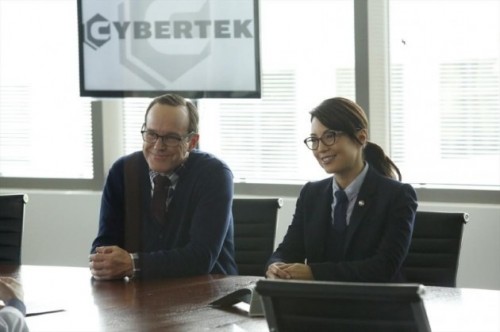 Last week, after being ambushed by Col. Talbot, Coulson and Maria Hill lead the team on a quest to get to Ward before he can gain access to the information on Skye’s drive. Meanwhile, Skye is stalling as long as she can, which works well enough, until Deathlok shows up.

A fight on the bus has Coulson and Skye using Lola to escape. And the team comes back together for a much needed calm before the storm. I really like that they ended this episode on a peaceful note (pre-credits tag excluded), it was nice to get a breather.

I also really liked the humor in this episode. My biggest criticism since episode 2 has been the lack of humor that is usually riddled throughout Joss’ work. You could tell that he had a bigger hand in writing the pilot than the rest of the season. But the past few episodes have had some really funny moments (probably one of the reasons I’ll miss Agent Koenig).

Speaking of the pre-credits tag, that was a twist I did not see coming. During the episode, I kept running through my head all the possible people that could have been in charge of Project TAHITI, but Coulson was not one of them.

This week will also have a nice dose of humor as Coulson and May go undercover as, essentially, Fitz-Simmons. Despite this being so close to the end of the season, this episode seems to be about origins. Coulson and May are undercover at Cybertek, the company where Mike Peterson got his tech to become Deathlok and there are flashbacks revealing how Ward and Garrett met and why Ward was willing to betray Coulson and his team.

Are you ready for season 1 to be over or do you wish they’d get started with season 2 right away!