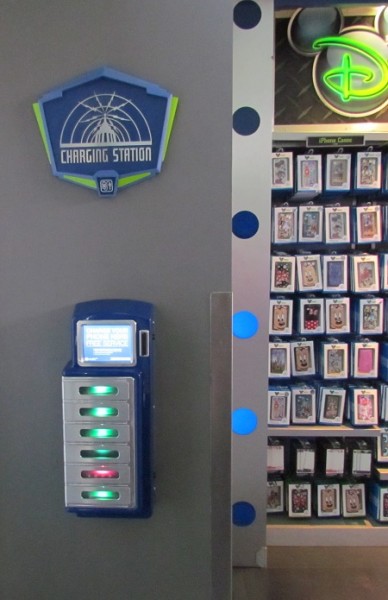 A new service offering free unattended smartphone charging is available at the Magic Kingdom. With families having an increasing dependence on cell phones, not just to say in contact with each other, but to use Disney’s new MyMagic+ reservation system and to make and change Fastpass+ plans via the My Disney Experience app, there has been an increased demand for places to charge those mobile devices.

Disney first added locations with banks of plugs and USB ports near the Tangled restrooms, the yellow Fastpass tent in Storybook Circus, and in the back of the Space Mountain store near the arcade. However, guests have to stay with their devices to charge them, and two of the locations don’t really work if its raining.

What might work better is if you could drop your mobile phone off, let it charge for a bit while you go on a ride or have a meal, then come back and retrieve it. It would be even better if this was handled in a secure location. 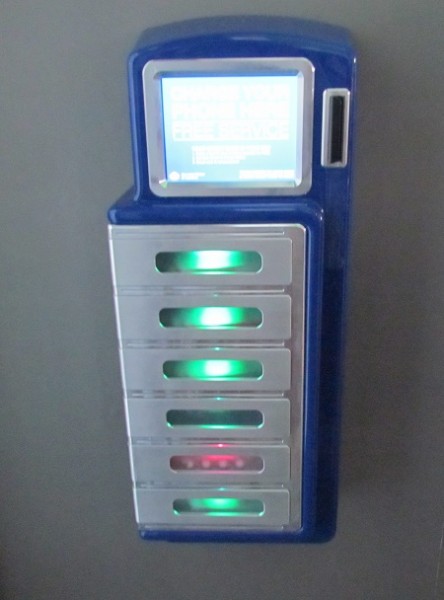 That’s what Disney has done with two sets of charging lockers now in testing at the Magic Kingdom. You activate an available locker with a credit card (although we tested it with a gift card and that worked too) then tell the locker what type of device will be charged (Apple Lightning, Apple 30pin, or the new ‘standard’ micro USB). It will then provide a bay for your phone that contains the three connectors. Plug in to the correct one and close the door. The light will turn red to indicate the device is charging. The light turns green when its fully charged. An empty chamber is blue. So you can look at the station and know whether it has availability.

Right now there are a set of 6 lockers in the Space Mountain exit store and 12 lockers in Cosmic Ray’s Starlight Cafe. Both are locations where a guest might spend some extended time (dining or in queue). Right now the service is free. Disneyland offers something similar, but does charge for it.

This current setup is a test. So if it works out, I hope they will bring these, and more regular plug-in and USB stations, to the other parks (water parks too) in a hurry. Please note, these charging station lockers are small and only fit a mobile phone sized device. If you have a larger item, you can still use the other charging locations.