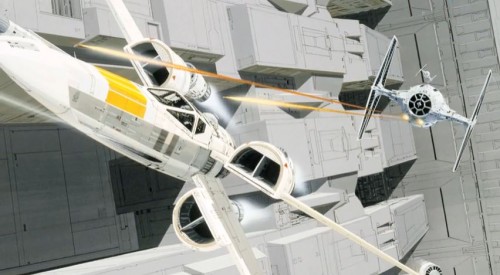 Since Day One of Disney’s acquisition of Star Wars and Lucasfilm, fans were concerned about what would happen to the Expanded Universe of Star Wars.

Lucas has always said that his projects (the two movie trilogies and The Clone Wars show) were officially canon and everything else (books, comics, video games, etc…) were unofficial entries into the galaxy far, far away. That is not to say that he didn’t pull themes and elements from the EU stories, he just never officially endorsed any of them.

Now Disney has opened up on their opinion of the EU. Here’s what Lucasfilm president, Kathleen Kennedy had to say:

“We have an unprecedented slate of new Star Wars entertainment on the horizon. We’re set to bring Star Wars back to the big screen, and continue the adventure through games, books, comics, and new formats that are just emerging. This future of interconnected storytelling will allow fans to explore this galaxy in deeper ways than ever before.”

It comes as no surprise that the new trilogy (Episodes VII – IX), though set after Return Of The Jedi, will look nothing like the EU stories that are set in the same time period. However, the new animated show, Star Wars Rebels, does borrow from the EU’s mythology.

The official press release says, “The Inquisitor, the Imperial Security Bureau, and Sienar Fleet Systems are story elements in the new animated series, and all these ideas find their origins in roleplaying game material published in the 1980s.”

Also, in order to not incite a riot, previous EU stories will still be published under the new Legends banner.

The first book that takes place in the new EU is being penned by John Jackson Miller. It takes place before Star Wars Rebels and Miller has had direct input on the story from the producers of the show.

Star Wars also released a video on their YouTube channel.

What do you think of Disney’s decision?