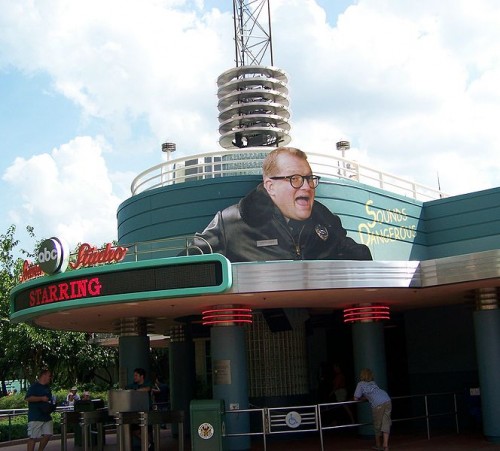 Do you know what May 1st is? The 25th Anniversary of Disney-MGM Studios…er, Disney’s Hollywood Studios, of course! I did it for DCA’s reopening, then for Animal Kingdom’s 15th Anniversary, so it is only right to keep the tradition alive. Thus begins the first article in The Disney Blog’s DHS History Lesson!

Let’s start off with the weirdest thing to ever be in a Disney theme park in the history of Disney theme parks. Now you might be saying “But Marshal, the bathroom of tomorrow was at Disneyland!” and you would be right, nothing beats Sounds Dangerous. Why is it weird, you may ask? Drew Carey, that’s why.

Now, don’t get me wrong, I am a Drew Carey fan. He was great on his ABC sitcom (and did wonders for the TV theme song) and his Whose Line and Price is Right hosting is fantastic, but his placement in this super random attraction to begin with created something so bizarre, it has to be noted.

Sounds Dangerous’ main reason of existence was to showcase “binaural audio technology,” so once you entered the theater, you immediately placed on headphones. There is a video that played to set up the premise: Drew Carey is starring in a new pilot called “Undercover Live,” where the lead wears a hidden microphone and camera to catch all the action without the rest of the public knowing. Of course, something goes horribly wrong and the camera goes out, leaving you in the dark with only the audio functioning.

Of course, they want to show off the audio, so then it becomes “cheap audio tricks” for the next 9 minutes, including a haircut, killer bees, and more. After your experience, you get sent into the Sound Works, where you can play around with different sound effects or go in a booth to do the same exact thing you just did in the main theater.

Why was this the set up? Who thought this was a good idea? Who actually went into the Imagineering headquarters and was like “Why don’t we put Drew Carey and headphones together”? Either way, it was a much hated attraction, eventually going to a seasonal only operation period before finally closing. The theater is now used for special events and Disney Holiday films during the busy Christmas season at the parks.

I would love for them to keep the binaural attraction alive, but they could do a lot more with it. Even keeping the ABC theme would be nice, as I wish that portion of the company had more presence in the parks. Why not talk about the old style of radio shows, then have a mini-episode of Modern Family or another popular ABC show in that style. The post show could be more ABC centric, allowing you to put yourself into your favorite shows.

Do you miss Sounds Dangerous? Would you like to see the audio format attraction return? Why did this attraction exist, again? Let me know in the comments below. Next time, we will discuss my favorite parade ever. Until next time…That’s a wrap!