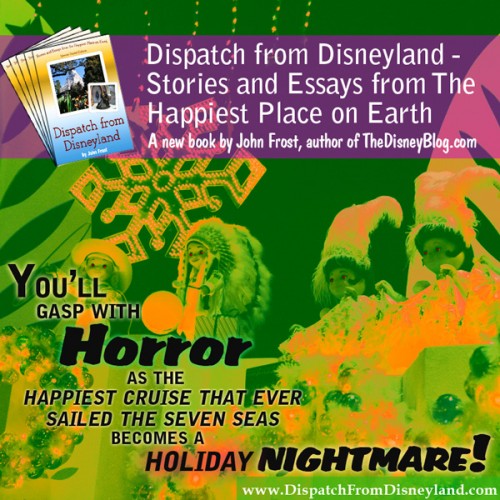 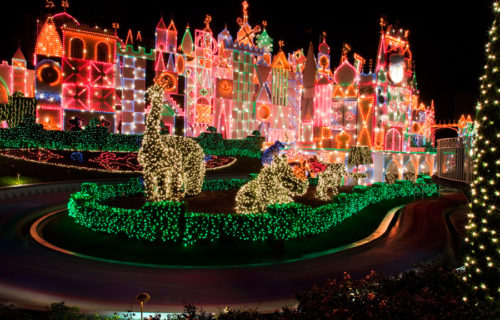 Oblivious we floated, boat bottom scraping the slough
Toward the first dark corner, could we make it, who knew?
On each side of the room the wee dolls were preening
Our boat nearly stopped, but we freed it by leaning.

“Wahoo!” we all cried as the boat carried through
into Canada, Ireland, then below the sea so blue.
There swimming mermaids jingled their shells
And we laughed and told jokes, for we thought all was well.

Our cursed tour continued all festive and happy
In it’s a small world holiday the mood was getting sappy.
Alas that all changed when ahead we did view
A back up of boats with no way to sail through.

A few minutes later and we still hadn’t budged.
As boats stacked up behind us, we were constantly nudged
Not a yard. Not a meter. We moved not an inch.
Then a voice from above advised we were in a stich.

We cried to the heavens, please set us free
At least turn off the music we’re down on our knees.
Madness seeped in as we all sat waiting
But the little dolls just stared their song not abating.

Someone started ‘the wave’ — it went from boat to boat
The weird wavy motion forced water out of the moat.
“Stop!” I cried, “The water is getting lower”
“If this goes on, our exit will be slower”

Still the song went on. It drove us all mad.
If we didn’t move soon, it was going to be bad.
And then joy of joy, we moved back three feet
Could the jam be letting up? Our punishment complete?

Ahead in the distance we saw boats funneling out
But we didn’t move at all. Had roots started to sprout
From the bottom of our craft, and into the moat.
What was holding us down, why wouldn’t we float?

A cast member appeared right out of thin air.
Where he wasn’t before, he was suddenly there.
He gazed hard at our boat with a quizzical look;
“I can’t reach you,” he said. “And I don’t have a hook.”

So we huddled together and came up with a plan
“Would it help if we pushed?” “Yes it would, if you can.”
The cast member watched as we grabbed the moat wall
“On the count of three shove. Give it your all.”

We leaned and we rocked but the vessel would not quit.
We pushed and we pulled then it moved just a bit.
“Harder” we cried. Our hopes growing dim.
Would we be stuck here forever, it really looked grim.

And then with a lurch we came free of our spot.
We made it twenty feet. Well that was a lot
Better then being stuck in one place.
We thrust off again, and were back in the race.

Could we get out of this building, away from it all,
Chased by the songs of an army of dolls.
They laughed and they jeered as our boat passed by
And all we could think was “Die dolls. Die”

Finally the mood changed. We were floating free,
“Deck the Halls” was in the air. We noted with glee.
The next thing we knew we were out in the clear.
With stars overhead, we let out a cheer!

The holiday lights still sparkled. Of that there was no doubt.
I cried with joy, “I can’t believe we finally made it out.”
Only twenty-two minutes? The grand total turned out to be.
I could hardly believe it. It seemed like eternity.

The park was now closed. All the guests heading home.
Happy Disneyland dreams in their sleep would roam
But for us few, us unlucky souls,
Our sleep would be tainted. The dolls had taken their toll.

If you sail on this cruise you’d better beware
For it’s truly a Small World Holiday Nightmare.

There are 28 more magical stories and essays inside “Dispatch from Disneyland: Stories and Essays from The Happiest Place on Earth.” I hope you’ll take a moment and, for the cost of a few Starbucks coffees, support The Disney Blog by buying on either at Amazon or on DispatchFromDisneyland.com.