I wrote a post on my blog about the MCU tie-in comics which essentially said, “They’re good, but they could be so much better,” so when I went to the store today to pick up a copy of the Captain America: Winter Soldier Prelude I wasn’t expecting much.

I knew that it would include a graphic novelization of the first Captain America movie and the official prelude to the new one, but it also included classic comic stories that introduced characters like Hawkeye, the Falcon, the Winter Solider, and Samuel L. Jackson’s Nick Fury.

My biggest complaint about this collection is that, of the seven collected issues only three of them are related to the MCU. Despite being a prelude to the new movie this weekend, more than half of this graphic novel has nothing to do with it. 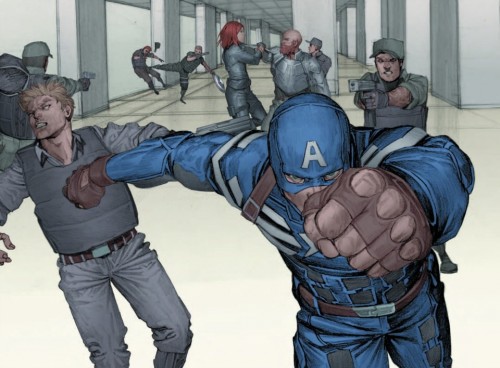 The graphic novelization of the first movie is on par with the rest of the tie-in comics especially in terms of the art and the story. Translation: The art is average and the story is, for better or worse, a condensed version of the movie.

The prelude comic, however, was very good. The quality of the art is the best I’ve seen from this comic series and while the story doesn’t reveal anything about the plot of the movie, it does show that S.H.I.E.L.D. is not the trustworthy organization it claims to be (though, if you’ve been watching Agents of S.H.I.E.L.D., you’ve known that for awhile) which is a theme that I think is going to be explored this weekend. The only criticism I have for the prelude is that it is only one issue instead of the normal two.

The classic stories are fun but also feel like teasers. The Winter Solider and Nick Fury stories, especially, are taken from the middle of specific story arcs so we get thrown into the story, introduced to the highlighted character, then end with a cliff hanger.

Overall, I’m not disappointed in my purchase, but mostly because I’m a completist, not really because of the stories themselves.

Do you read the tie-in comics?