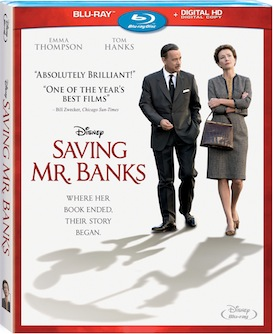 Mary Poppins, the movie, was such a success for The Walt Disney Studios that it funded a big expansion at the studios, at Disneyland, and even gave Walt the freedom to seriously pursue his grand idea of EPCOT out in Florida. The story of how Walt Disney came to make Mary Poppins was the subject of last year’s “Saving Mr. Banks,” or so we were told. As it turns out, the movie was as much about PL Travers (a slightly fictionalized version of the Mary Poppins author) as it was about the making of the movie. Still there were some incredible gems and powerful moments in the films.

As it usually goes in Hollywood, the film we see on the big screen is different than what the producers originally set out to make. One just released deleted scene from Saving Mr. Banks shows what might have been.

If you buy the Blu-ray or Digital HD editions, “Saving Mr. Banks” offers viewers high definition picture and sound, plus never-before-seen bonus features, including “The Walt Disney Studios: From Poppins to Present,” in which director John Lee Hancock takes viewers on an insider’s tour of Disney Studios today and reflects on studio life during the creation of Mary Poppins. Additional bonus materials include “Let’s Go Fly a Kite,” in which the film’s cast and crew sing an impromptu version of the iconic song on set during the last day of shooting, and three deleted Scenes.

Saving Mr. Banks is available on DVD on March 18th. Pre-order today via Amazon and save up to 38%. Your purchase will help The Disney Blog.