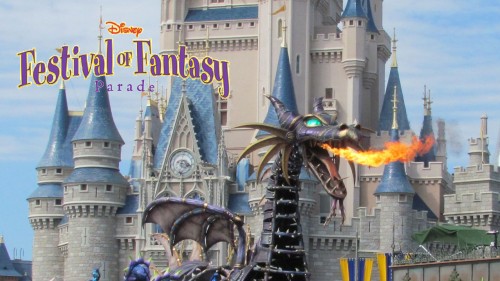 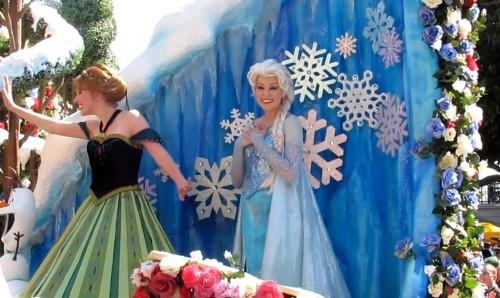 I was very pleased to get a few moments to talk to Randy Wojcik, Executive Producer, and Steven Davison, Creative Director, for Disney Parks and Entertainment. Both have a great history with the company. My first encounter with Davison was when he helped develop the first “Believe… There’s Magic In the Stars” fireworks at Disneyland, he also helped develop “it’s a small world holiday.” He hasn’t had a real ‘miss’ since.

Here’s the float-by-float breakdown with Disney’s official description in purple and then my comments below: 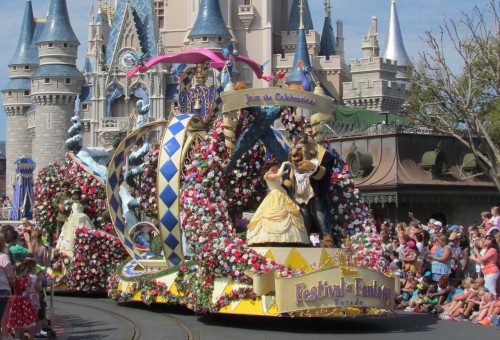 The Princess Garden – This pageantry of princesses celebrates Disney royalty. Cinderella, Tiana and Belle accompanied by their respective princes, ride in a garden of topiaries with woodland creatures, birds and more. Cinderella’s dress playfully twirls like a turntable, while Swan Court couples lead the 50-foot-long majestic float, capped off with a special appearance by Anna and Elsa from Disney’s hit animated feature, “Frozen.”

This is one of two floats imported from Japan. It comes off as a very lush tribute to Disney princesses, however, there are only four on the float. The older mirrored float could hold six or seven and their princes. Luckily, the rest of the parade features a few more of those favorites from the court. I have not found the Hidden Mickey yet, although I’m told its in the snowflakes in the Elsa & Anna section. Said section, spins slowly during the parade, so depending on how it’s spinning and where you’re sitting you may only catch a short glimpse of the Frozen sisters. Tangled – A massive long ship on the high seas showcases Flynn Rider and Rapunzel in search of adventure and another Best. Day. Ever! Rapunzel’s iconic tresses weave throughout this 36-foot-long float decked out with swaying pendulums carrying dastardly thugs.

This is the most kinetic of the floats by far. It has an incredible amount of detail on it. It also features a very funny performer ahead of the float. The ‘mime’ got lots of laughs from the crowd during both viewings of the parade. Note that the swinging motion stops as it winds its way past city hall. So if you want a good picture of Flynn Rider, hang out near the Harmony Barber shop. He’ll be practically at a stand still. 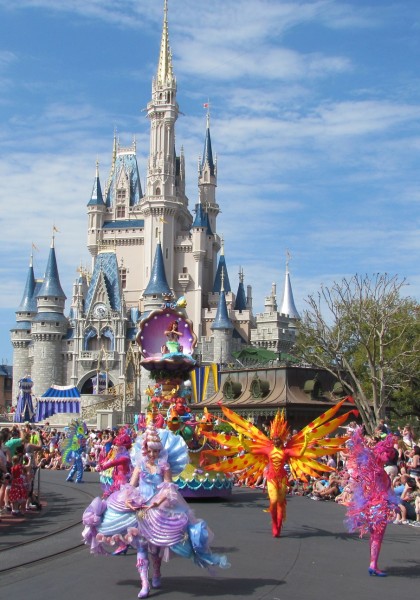 The Little Mermaid – Ariel and her friends sit atop a colorfully kinetic seashell music box that boasts an enchanting musical jubilee. There’s no shortage of whimsy on this Under the Sea float with conga dancing fish kicking up their fins and bubbles galore. Shimmering fabrics and intricately designed costumes for the Lion Fish, Coral Fish, Seashell and Sea Horse performers are runway-inspired.

This float has one of two (three really) tributes to previous parades. Sebastian had a former life on the under the sea section of Spectromagic. The costumes created for this unit are amazing, but the float itself is sort of underwhelming. Also, I think Ariel is too high up in the air. Most of the kids on the curb won’t get a good chance to interact with her. I love the Newsies element added to the choreography of the Lost Boys. In fact, all the the parts of the float are great, but they don’t come together for me. Having Tinker Bell on the back was a nice surprise, but I would like to see interaction between Smee, Hook, and the Lost Boys. Also, the height of this float means that Peter and Wendy are a long ways above the kids on the curb. The trailing croc float has been featured in a few Magic Kingdom parades before, most recently the Boo To You parade at Mickey’s Not So Scary Halloween Party. 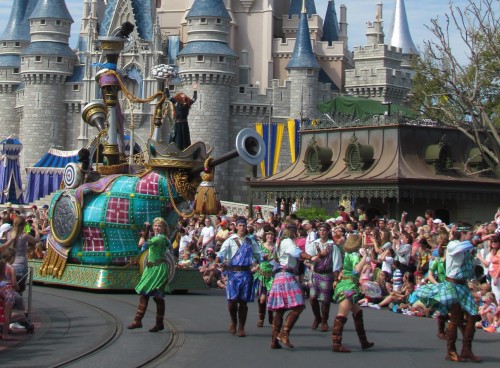 Brave – Celtic couples and a vessel shaped like an enormous bagpipe announce the arrival of Merida perched high on her majestic crown. Scottish dancers step to melodies of the Great Highlands in celebration of the popular Disney*Pixar film, “Brave.”

This float has the least going on of all the floats. But the dancing and music make up for it. Also note the three brothers, in bear cub form, are on the float. So keep an eye out for their antics. Sleeping Beauty – The heroic Prince Phillip battles a Steampunk-inspired Dragon as the wicked Maleficent. This float stretches 53 feet in length and 26 feet tall with a prickly spinning wheel dead center of the float. With fiery eyes and glowing effects the spectacular dragon was built on an articulating chassis allowing the float to bend and flex as it moves along the parade route – a first for Disney parades. This float was designed in a partnership with Tony Award-winner Michael Curry. There’s Prince Phillip, thorn-inspired stilt performers, dramatic raven dancers, plus the three good fairies, Flora, Fauna and Merryweather glide along the parade route.

Yes, there’s a fire-breathing dragon in the parade and it’s mega-cool. My biggest problem with this float is the stilt walkers and ravens are so impressive in size and design, that you have to look past them to see the also wonderful action between Prince Phillip (in person) and Maleficent (in dragon). For safety reasons, the dragon won’t ignite when there are trees or buildings too near. So pick a clear spot along the route if you want a chance to see the fire. 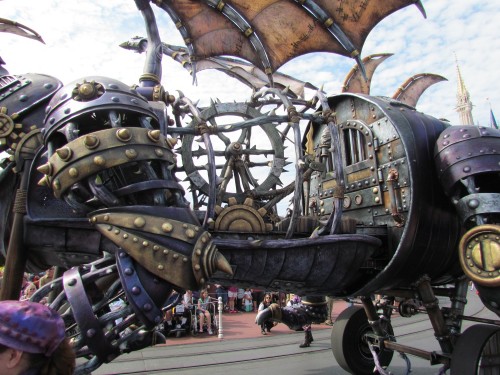 Also, I mentioned that every float has a hidden mickey. Maleficent’s is on the elbow of the left fore-leg. Do you see it? The 90-foot-long finale float is the second that was brought over from Jubilation parade in Tokyo Disneyland. There were minimal changes made, but they did add Figaro and Cleo from Pinocchio to the float. The pair previously existed on the white float from Celebrate a Dream Come True parade. The Mickey’s Airship float is new to Festival of Fantasy. 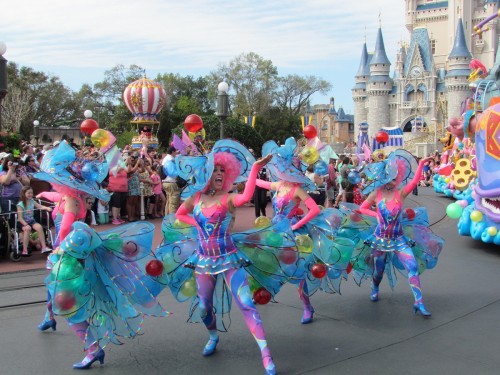 If you look close at the second performer from the left, you’ll see a green balloon with two red balloons adjacent. That’s one of the costumes with a hidden Mickey of its own.

If you want to see more pics, hop on over to my Flickr gallery from the parade. I’ll be updating it with more pics as I see the parade again.

previousNew Starbucks Now Open in Downtown Disney District at Disneyland Resort
nextWayback Weekend: Save 50% on your Purchase of Dispatch from Disneyland eBook