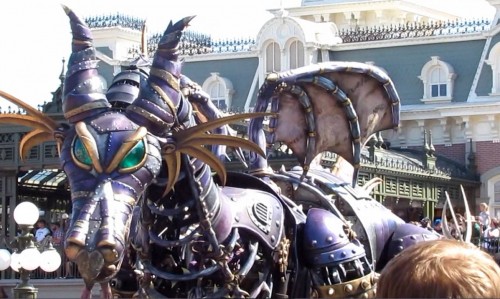 The whole parade was amazing and every unit stood out in its own way. However, the unique design of the Maleficent Dragon float stands out. The float stretches 53 feet in length and 26 feet tall. With fiery eyes and glowing effects the spectacular dragon was built on an articulating chassis allowing the float to bend and flex as it moves along the parade route – a first for Disney parades. 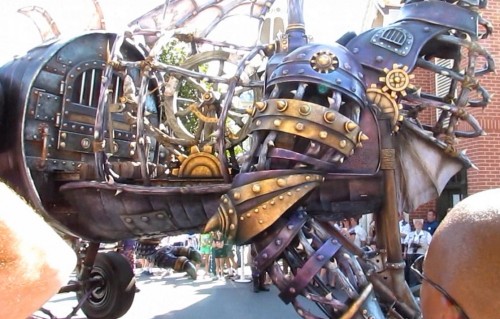 The Steampunk details are what makes the float for me. In Maleficent’s belly there’s a steam furnace for power, plenty of steam-inspired instruments and a giant prickly spinning wheel dead center of the float. Which is practically a requirement of the Sleeping Beauty tale, but a marvelous touch on the float.

Yes, Maleficent even breathes fire. As you can see in this video from yesterday’s parade:

Meanwhile on the street the heroic Prince Phillip battles the steampunk-inspired Dragon version of the wicked fairy Maleficent. In addition to Prince Phillip, there are thorn-inspired stilt performers, dramatic raven dancers, plus the three good fairies, Flora, Fauna and Merryweather.

This float was designed in a partnership with Tony Award-winner Michael Curry whom long time Disneyland fans will recall from his work on The Lion King Celebration parade (among his other amazing work). 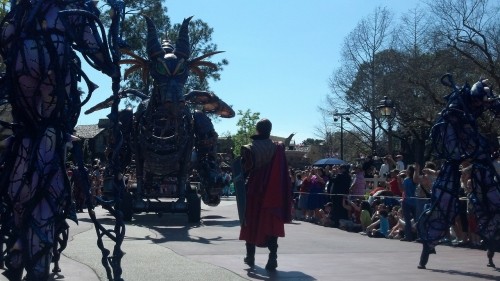 Are you planning to catch the Disney Festival of Fantasy Parade on your next visit to the Magic Kingdom?