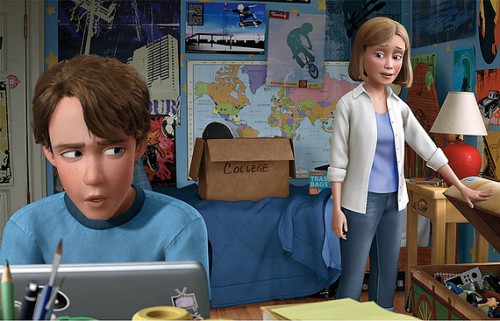 Jon Negroni, the same gentleman who brought you the unified theory of Pixar, has a new interesting theory about the interconnectedness of characters in the Toy Story universe. You might be surprised and who Andy’s mom actually is. If true, and Negroni paints a powerfully persuasive case, it adds a whole new level of emotional depth to the films.

The theory goes that we are told Andy inherited Woody and, likely, his fabulous red cowboy hat from someone in his family. Woody has been a toy of the Davis family so long that he doesn’t remember his backstory. He has to learn that from Jessie. Jessie, of course, had separation anxiety from when her owner Emily gave her away and Jessie was boxed and forgotten. But the real connection comes when you compare Jessie’s hat, the hat Andy is wearing in Toy Story, and the hat Emily has on her bed back in the day. They’re all the same hat. So could Jessie’s owner Emily have given away the doll, but kept the hat, which she then gives to her first child – Andy – who later comes to possess the very doll Emily (aka Ms. Davis) once owned as a child?

It’s a little tough to follow but read more of Negroni’s theory which he explains in great details and with pictures.