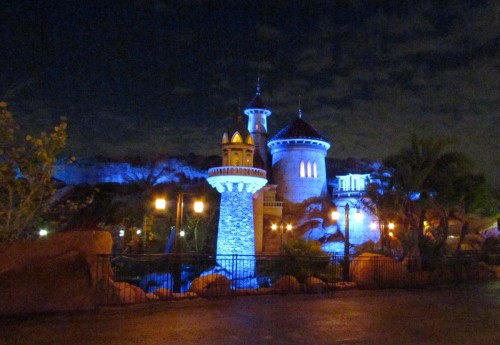 Every night around 15 minutes before the fireworks shoot off, guests walking through the pathways of New Fantasyland “may get wet.” That phrase sounds familiar to guests who’ve seen Fantasmic!, but why would it happen in New Fantasyland? Well, because the area is significantly closer to the fireworks launching pad than theme park buildings have ever been.. So Disney built in a sprinkler system that would wet down the roof of the buildings to prevent them from catching fire.

Tonight, something went wrong with that system. The roof of the Journey of The Little Mermaid attraction was briefly lit on fire by falling debris from the fireworks and then relatively quickly extinguished with a fire extinguisher. Small spot fires are actually not that unusual in the brush area behind Fantasyland. You can see them from the train when you ride around. There was even a time in 2001 when one of the spires of Cinderella castle had a post-fireworks burn. But this very visible flame was a first for New Fantasyland, perhaps that dragon from the opening of the land finally came back.

Pederson says the fire started small but grew to include some of the rockwork before it was put out. The area and attraction was evacuated while things were checked out and then it was re-opened before the park closed. No reports of any injuries either according to Disney’s statement to the press.