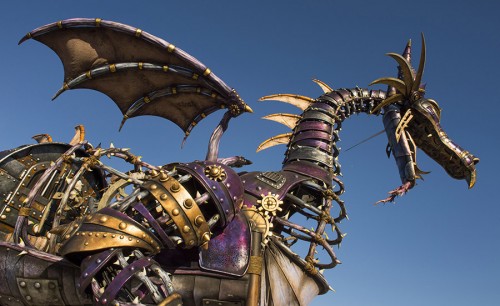 Everyone is excited about the new parade coming to the Magic Kingdom. The Festival of Fantasy parade is really the first parade in a long time to bring us the same quality of floats that Tokyo Disneyland and Disneyland Paris have had for years.

All the floats are on property and Disney has started to put them through their technical paces. Soon they’ll be in rehearsal on the streets of the Magic Kingdom with a grand debut sometime in March 2014. In the meantime, Disney has shared this glimpse of the floats moving around backstage.

That Maleficent Dragon is 53-feet long and features a Steampunk feel, but it’s also quintessential Michael Curry (whose work I’ve admired since he did the The Lion King Celebration parade puppets back in the day at Disneyland). So far it’s my favorite of the floats. Which float has caught your eye?

previousMarvel’s Agents of S.H.I.E.L.D. – How Would You Bring Back Viewers?
nextBest Food and Dining Values at Disneyland