How will Disney and Lucasfilm Adapt the Star Wars Canon for New Films? 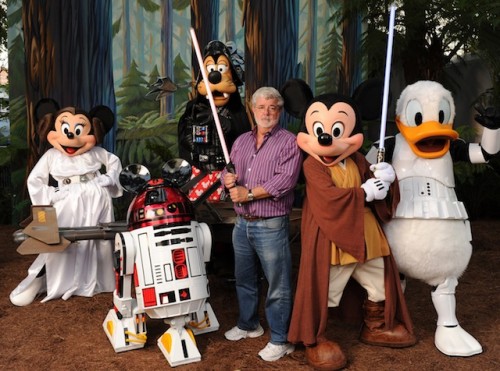 As we know, Disney now owns Lucasfilm and has committed to finishing the trilogy of movie trilogies, plus a spin-off or two. Fans of Star Wars may debate whether episodes 1-2-3 were any good or not, but we’ve almost all grumpily accepted that they are part of the accepted canonical elements of the Star Wars Universe (even Jar Jar Binks as much as we’d love to see him go down the memory hole).

Since almost day one after the first movie premiered, the Star Wars universe has expanded to include characters and plot lines that reach far beyond the movies. There have been novels, comic books, cartoons, a Christmas Special (yeah George, we haven’t forgotten about that one), and quite a bit more that occupies a realm we call the Expanded Universe (EU) hierarchy.

The movie canon and the EU have always remained mostly separate. But if Disney wants to go forward, they’ll have to deal with all the cruft of the EU. But the EU is huge and does not always jive with the canon, let alone with itself, hence the hierarchy. So how will Disney straighten it all out?

The answer is very carefully. As hinted at over in Celebration Europe and recently revived in discussions on Twitter, Disney and the Lucasfilm Story Group (aka the team in charge of maintaining what’s canon and what’s not) is in the process of drastically redefining the universe of Star Wars.

Leland Chee, a member of the story group has been tweeting about the changes. He said that the main goal is to selectively merge the canon between the movies and EU material creating one cohesive canon across the entire franchise, adding that “more so than ever, the canon field will serve us internally simply for classification rather than setting hierarchy.” This should mean a stricter, more orderly, universe going forward leading toward whatever stories are told in the movies.

I was once an avid reader of the Star Wars novels. I have my thoughts as to which should be made into movies 7,8, and 9. From the sound of it, JJ Abrams and team will be going in a different direction than any of the novels. They may choose to include certain elements (Mara Jade, the Emperor’s Hand ) and exclude others (the young Jedi Knights series (Leia and Hans’ kids(). But it’s good to know the members of the story group will be keeping a close eye on things.

Are you confident that the Star Wars universe is in good hands? What do you think should be in the first new movie – episode 7.

For further reading, enjoy this great op-ed on the subject at Ars Technica.