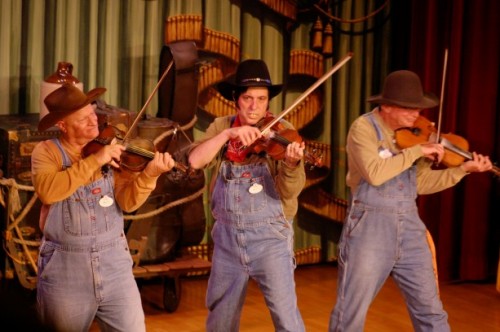 For more than 20 years the musical group Billy Hill and the Hillbillies have been entertaining guests at Disneyland. Sadly, they are now getting ready to begin their final season of performances at the park. A special holiday show starts this Friday and their final day of performances will be January 6, 2014.

20 plus years is a long run for any show at Disneyland. The show has persevered despite Disneyland’s best efforts to kill it over the years. They’ve moved them outside, put them in a near closed restaurant, split up the talent into multiple teams, and more. But the show persisted. 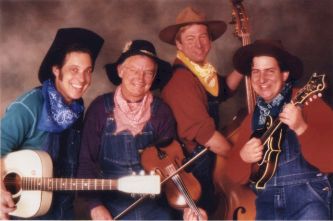 The Billy Hill and the Hillbillies was founded by taking bluegrass master musicians and merging the comedic gold of Kirk Wall. The Marshal Brothers, Evan and John, rocked the Mandolin and Upright Bass respectively, but also showcased considerable talents on the violin. Dennis Fetchet added his own comedic talents to the pool, not to mention the fastest fiddle in the entire Frontierland area.

The core of the group was first heard at Disneyland at the opening of Splash Mountain in 1989. In 1992 Wall was grafted into the act and they were asked to perform two days a week at the Golden Horseshoe stage as relief for Dana Daniels comedy & magic act.

The Billy Tell Overture number from the early days of the show in the Golden Horseshoe was fantastic and Wall’s improvisations during the Orange Blossom Special often stole the show. To be honest, when the show first started, I longed for the days of the old revue, but the Billies won me over with their quick driving style and their humor. It was a blast to see them progress as performers as their show was extended over the years.

Overtime many of the original members of the Hillbillies left to focus on their own bands and music and many other talented comedians and musicians were mixed in. A big hill billy salute from everyone at The Disney Blog to all the performers for their years of generating some magic for Disney’s guests.

Please share your favorite memories of Billy Hill and the Hillbillies in the comments below: