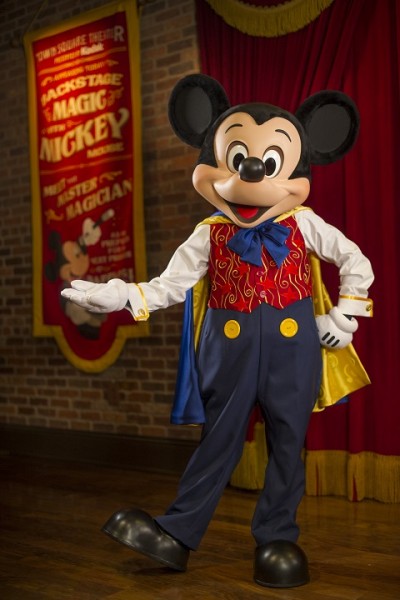 Disney has been working on their “living character” initiative for over a dozen years. My first encounter with the technology was with an interactive Stitch in Disneyland’s Tomorrowland. Since then there has been Lucky the Dinosaur, Turtle Talk with Crush, and a number of other projects. At the same time Disney has been working on adding articulated heads to many of their walk-around characters (Timon at the Festival of The Lion King show was the first appearance of this technology in Orlando). This lets the operator move their eyes, mouths, and other features (like wiggling ears or nose) via puppeteer controls in time with a pre-recorded track. For some time now Disney has been testing the combination of the two initiatives into one magical experience.

After many months of testing the Meet & Greet with Mickey Mouse in Town Square now has a talking Mickey. Guests will encounter Mickey dressed in his finest magician duds as he gets ready in his rehearsal room amid posters, steamer trunks and stage props from his magical career in theater. If you’re lucky he might do a magic trick for you, but the greatest magic of all happens when Mickey Mouse speaks with guests before helping them create even more memories with photos, autographs and hugs.

I’ve also been told that if guests are using the NextGen MyMagic+ Magic Bands Mickey will be able to greet them by name.

Feedback has been generally well received so far. Some people say it is a shock to enter the room and have a character who has been silent in person all ones life suddenly start conversing with you. I suspect that in 5 years it will be as common as a regular meet and greet is now. What’s your prediction.