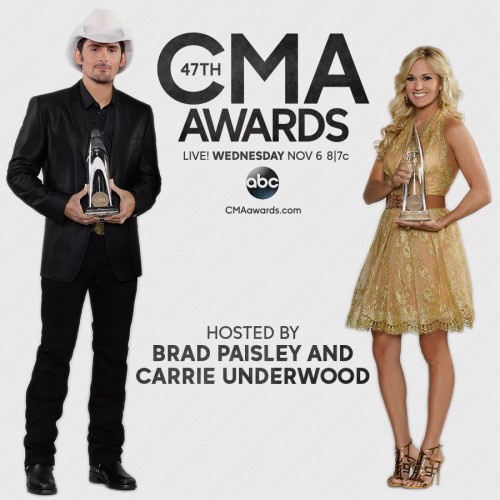 My thoughts are italicized.

This list, in my opinion, is pitiful. Blake Shelton and Jason Aldean have had boring years music wise, with Blake’s nomination making a whole lot more sense than Jason’s, but they still don’t fit in the category. Taylor Swift had a great pop radio year, but an awful country year. The nominating committee doesn’t seem to realize that Taylor isn’t country anymore, her music is more pop. George Strait, I understand. His farewell tour is going on and he had his 60th Number One single. Let me repeat that…HIS 60TH NUMBER ONE! That is why he’s the King. Luke Bryan is not only a teen heartthrob (mention his name at my high school and see how many girls faint), he also has great sales and good music. Expect Luke to win, with George to be the upset. The other three have no shot.

Get ready for a rant about Entertainer, because I have one. Carrie Underwood has never been nominated in this category. She has hosted the show for 5 years and has sang Number One after Number One and gets no EOTY recognition from the CMAs. This year, her album “Blown Away” has created 4 Number One singles, and no nomination. Of all the years to give her the nomination, this would have been the one, and they missed their opportunity. I am so angry about this, you have no idea.

Again, I would expect to see a Luke win here. Eric Church would be the upset here, as he is climbing the ladder of country music royalty ever so quickly. Keith Urban had a really uneventful year, but his album just came out and his single “Little Bit of Everything” is doing great…but those things came out after the nomination period, so they must have nominated him knowing his new stuff would do well, and I’m not sure if I agree with that mentality, as Tim McGraw had a pretty great year and didn’t get nominated, same with Brad Paisley. Some sketchy voting over at CMA Central.

This could be tricky. Miranda Lambert could pick up her 4th award in this category, though she doesn’t deserve it. The only one that REALLY makes sense is Carrie Underwood, and I LOVE Kacey Musgraves (more on that later). If Carrie doesn’t win, you will seeing some very angry tweets come November 6th. Also, I don’t know why Kelly Clarkson is nominated either.

No question, Florida Georgia Line. There is no other possibility. Period.

This one is trickier than it appears. Florida Georgia Line is the favorite, as they have sort-of-kind-of-totally taken over country radio. Kacey Musgraves, though, has stellar critical acclaim and a hit single (and another so so single) from her popular album. She is my favorite country singer currently (I am obsessed), so she is my pick/hope for winning. Lee Brice, on the other hand, also deserves some credit for having some fantastic tunes taking over the airwaves, so he is a possibility. While some say this is Florida Georgia Line’s award, think again.

Album of the Year
Based on a True Story
Blake Shelton
Producer: Scott Hendricks

Another tough one. “Blown Away” has the commercial success and “Same Trailer, Different Park” is a critical diamond (and is my favorite album of all-time, not even kidding)., but “Tornado” is a commercial success, recently becoming platinum, and also a critical darling (and another album I thoroughly enjoyed). This will be a tough race, but it will come down to Kacey or Little Big Town, both I am totally fine with winning.

It is between Little Big Town and The Band Perry, and I am still going to pick Little Big Town, as The Band Perry got snubbed A TON this year for their two kick-butt singles “Better Dig Two” and “DONE.” so I am assuming this will translate to no wins for them. Little Big Town has Pontoon, Tornado, and the moderate success of “Your Side of the Bed” (my favorite song off the album) under their belt, so I expect/hope they win.

This category is known for being the popularity award, as it goes to, pretty much, the most popular song of the year. In this case, it is Cruise’s to lose, with Wagon Wheel being the 2nd most popular.

Song of the Year
“I Drive Your Truck”
Songwriters: Jessi Alexander, Connie Harrington and Jimmy Yeary

Pontoon is nominated for Song of the Year…but won Single of the Year last awards…does that make sense? No. No it doesn’t. I am still super excited about it though! My prediction is “Merry Go ‘Round” being a win for Kacey. Kacey is nominated twice in the category, as she co-wrote “Mama’s Broken Heart” for Miranda Lambert, but if Kacey is to win, she’ll win for her own tune. “I Drive Your Truck” could be the upset.

“Tornado” or “Blown Away” are the 2 possible choices. Truthfully, it could go either way. “Tornado” won the ACM Award in April, so that seems like the safer bet. Both are incredibly deserving, though; they are gorgeous music videos.

Will you be watching the CMA Awards on Wednesday, Novemeber 6th at 8pm? Are you excited for any performances? Do you love Kacey Musgraves as much as I do? (Highly doubtful) Let me know in the comments below. I have included a Spotify playlist of some of the nominated tunes. Until next time…Have a Magical Day!