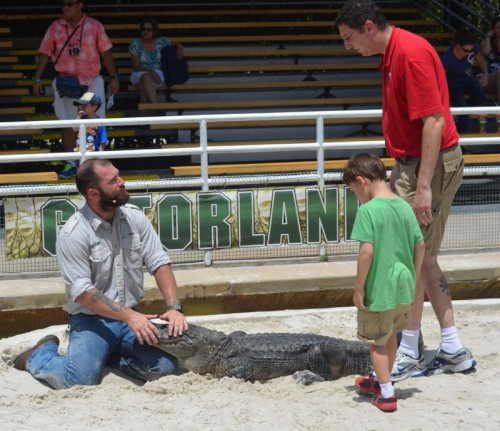 I did something last week that I haven’t done in fifteen years: I went to Gatorland. Now, I know it’s not Disney World and I’ll be honest, you usually have to drag me kicking and screaming from Disney property, but I was part of a group that was invited for a private tour so how could I turn that down? It didn’t hurt that my boss took me there in this sweet ride. Yes, it’s that car. But in fairness, I was coaxed off of property with the promise of barbeque as well, so it’s not like I could say no.  I take barbeque very seriously.

Gatorland has been in Central Florida since 1949 and it’s been owned by the same family that entire time.  At first glance it’s a kitschy tourist attraction that harkens back to the days B.D., before Disney as the folks at Gatorland like to say, when Orlando was a sleepy little backwater that tourists passed by on their way to more glamorous destinations like Miami or Palm Beach.

Sure, there’s a corny gator wrestling show and you can sit on a gator and get your picture taken, but the people here also love the animals under their care and you can learn a lot from a visit.  At Gatorland, you’ll see rare white alligators that have to be kept indoors because the sun is too harsh for them, large snakes, even the alligators more aggressive cousin, the crocodile.  If you feel like it, turkey hot dogs (they’re more healthy, of course) are available for purchase so you can feed the gators.  We loved watching them come swimming over for a little snack.

We met up with Mike, one of the managers, who showed us around the 110 acre facility that houses both show areas and nature preserves, including a bird sanctuary that surrounds a breeding marsh where 100 or so gators live.   There’s also a zipline that goes around the entire facility, for more daring guests. Currently, Gatorland is installing new homes from some rescued bobcats and other animals that will give them more comfortable–and appropriate–digs than their previous homes. 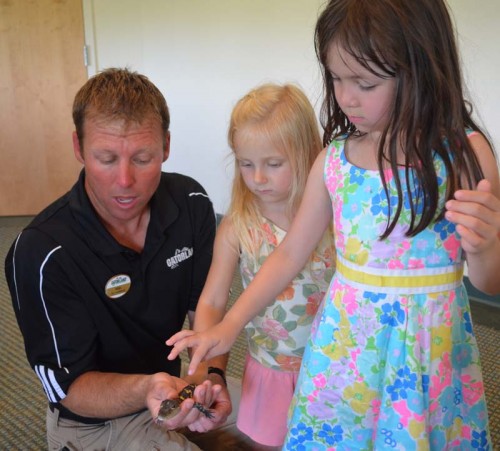 Mikes been at Gatorland for twenty years and you can tell that it’s his passion.  I liked his enthusiasm a lot. At one point, he looked at us and asked excitedly if we wanted to meet his favorite animal in the park. He then took us to meet Chester who, at nearly 14 feet was such an ornery gator that he couldn’t be housed with the others. Mike was part of the team that caught Chester when he was causing trouble in Tampa and brought him to the park. They also rescued Harvey from a school up north and taught him how to swim–yes, he had never lived near water, but at Gatorland he was living high on the (ahem) hog in the breeding marsh.  What really impressed us is that when he called Harvey, he came swimming over! Gators may have small brains, as we learned, but they know who their friends are. 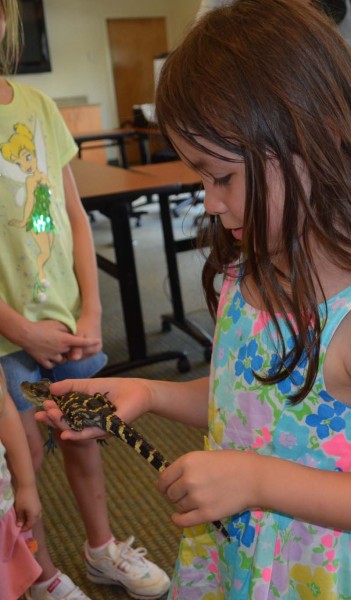 I know that a lot of Disney guests take a day off from the park. Maybe they spend it at Downtown Disney, but seriously, you can shop anytime, right? If you’ve got a car, Gatorland is about a 25 minute drive from Walt Disney World and costs only $24.99 for adults and $16.99 for kids ages 3 to 12. That’s a pretty good deal, especially when you consider that it’s a fun educational experience at the same time.  Most of the walkways near the enclosures and ponds are covered, so you’ll be protected by the sun, but the entire experience is outdoors, so drink plenty of water. You’ll also want to wear plenty of sunblock while you’re out enjoying the gorgeous nature trails.

Have you ever visited Gatorland? What did you think?