Do you ever find yourself doing something in a Disney park you wouldn’t do anywhere else? Like how you rationalize eating an entire cupcake as big as your head? Or putting pink glitter in your hair? Well don’t feel alone. There are thousands of other guests who share your secret shame. Now, I’m not saying I do all of these, but let’s just say I’m, ahem, familiar with the following:

10.  Hunting down the biggest snack that will count as your snack credit.

And why wouldn’t you? If you want to beat The Mouse at the dining plan, you’re practically obligated to do so. 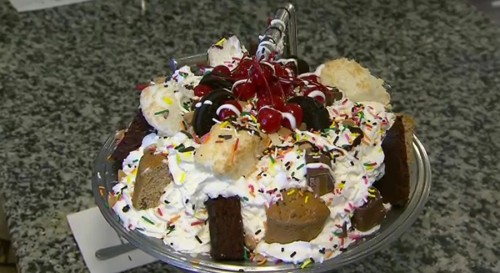 9.  Feeding the kids a Kitchen Sink for dinner.

Six months later when the kids are complaining about having to do their homework and eat vegetables and how you’re the worst parent ever, whip out those pictures and silence them (almost) immediately.

8.  Napping through Hall of Presidents.

Let’s face it: You deserve a nap and you didn’t really like history class anyway.

7.  Going crazy on soda with your refillable mug.

6.  Buying too many plastic “things!”

Sometimes, it makes complete sense to me to buy refrigerator magnets. Do you know when that is? On the last day of my trip, when I’m kind of sad to be leaving.

5. Dessert at every meal.

Why not? Think of all the calories you’re burning. In fact, all the walking you do at Disney World is such an effective form of weight loss that Disney is actually in the beginning stages or marketing it as a weight loss camp. Okay, I made that up, but now that it’s out there in the internet, it’s going to become a thing. I’m sure of it.

4.  Overdoing it at the toppings bar.

There’s something about the toppings bar at Cosmic Rays that makes me lose my judgment.  Suddenly, I want to glop on mustard and ketchup and stack pickles and lettuce several inches high. Sure you might have to use a knife and fork to eat your burger, but it’s free! You have to take it.

3.  Stealing a kiss in the Haunted Mansion.

Come on, we’ve all done it. Just remember kids, there are cameras in there!  You don’t want to end up on YouTube.

It’s a known fact that Walt Disney World has some of the most interesting, awesome, and weird people-watching on the entire planet. 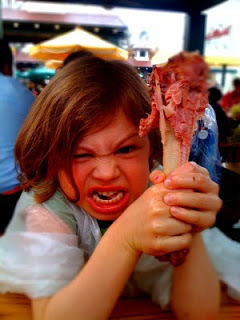 Let’s face it: You secretly think Disney’s smoked turkey legs are the perfect food: They smell delicious, they’re portable, and they’re high in protein. And what do you need when you’re tackling the parks? A portable high-protein food.

What are your favorite Disney Indulgences?