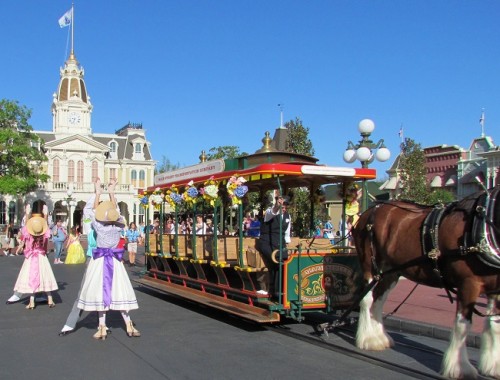 Part of what makes a trip to the Magic Kingdom so, well, magical is all the little detail that goes into making it a transporting experience. Sure, there were never roaming horse drawn trolleys of signing and dancing folk back in the early 1900s, but in the imaginative world of Disney there could have been. So it feels absolutely fitting when a trolley full of performers stops in the middle of Main Street USA to entertain.

Believe it or not the Main Street Trolley Show has been running for 10 full years at the Magic Kingdom. Along the way there have been seasonal changes to the show along with general updates. It’s even had a cousin appear at the revamped Disney’s California Adventure with a Newsies inspired twist. Here’s an inside look at the changes they made to this summer’s show:

Which is your favorite piece of street based entertainment in Walt Disney World?