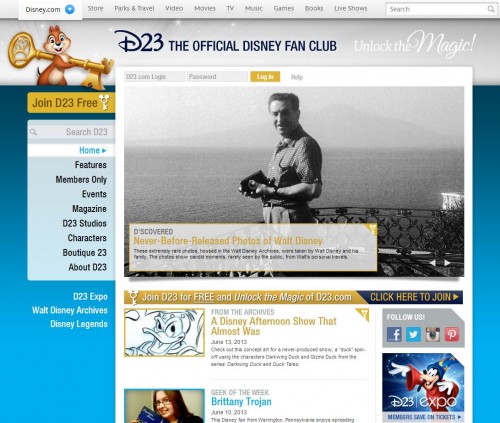 In a much anticipated move, D23, the Official Disney Fan Club has relaunched their website. It now includes more member-exclusive content, but the cost to become a member has been reduced to zero. Paid membership levels with additional benefits will remain.

D23: The Official Disney Fan Club relaunched their reimagined website with thousands of pages of new content, including a story that features photographs of Walt’s daughters Diane and Sharon on the merry-go-round on that fateful day that ultimately changed how Americans — and people around the world — vacation.

The Walt Disney Archives recently discovered rolls of film from Walt’s personal camera with hundreds of images, just a few of which are showcased today on D23.com in their new member-exclusive section. Other photos include a young Roy E. Disney on the same carousel, as well as candid moments from Walt’s life and travels around the world.

In addition, visitors to D23 will find new content, including:

Head over to D23.com today and sign up for a free membership to unlock this content and more in the exclusive members only area.

Now that D23 is moving down the path toward actually being a fan club for all Disney fans, what would you like to see from them in the future?