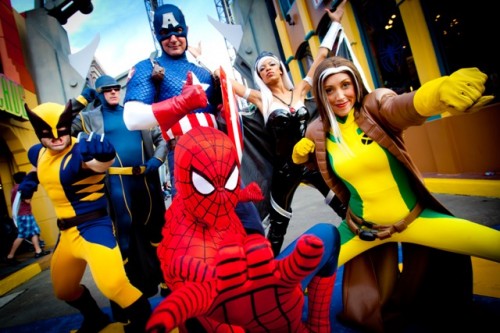 I did forget to cover one chapter of the Orlando theme park wars. I often see the question, why hasn’t Disney added Marvel characters to Disney’s Hollywood Studios yet? Disney has said they’re actively looking at ways to involve Marvel characters in the parks. They even opened a Stark Enterprises exhibit at Disneyland to promote Iron Man 3. But there’s a big roadblock to using Marvel in Orlando.

That’s because Universal owns the theme park rights to about 8 of the core Marvel superheroes within a 250 mile radius of Orlando. Marvel gave Universal these rights when they opened Islands of Adventure in renewable in perpetuity as long as they paid a reasonable licensing fee every year. That agreement is still in effect and, unless Disney pays Universal a significant sum, it’s not going to change. I’m told that Disney’s lawyers threw everything they had at the contract before they finalized the purchase of Marvel, but Universal controls nearly every option. Disney couldn’t even run the Avengers or Iron Man monorails on the EPCOT look for fear or raising the ire of Universal.

My guess is that Universal would be happy to sell Disney back those rights for the right price. That price would have to include enough money to totally relaunch that corner of Islands of Adventure plus a reasonable sum to cover expected profits from the Marvel characters for probably a decade or so. For Disney to want to pay that amount (most likely in the neighborhood of a half a billion dollars) they would have to be able to convince the Walt Disney Company board of directors that the cost could be recouped with whatever Marvel expansion they decide to build. The leading contenders there are either A) re-theme Streets of America in DHS into a Superhero land (think roller coasters flying by overhead, a stunt show, a dark ride or two, and a Marvel makeover experience for the kids) or B) a fifth gate thrill park with a villains vs hero theme. (combining Marvel, Star Wars, and Disney heroes and villains). Option B) is at least 8 years off, so if that’s what Disney is leaning toward, they probably don’t feel in a rush to make an offer to Universal.

The themepark division as it stands now is earning The Walt Disney Company an estimated $300 million in net profit each year. So any move on Marvel in Orlando would have to raise that significantly to pay for the cost of the payoff to Universal and the new construction. Are there enough Marvel fans that would want to add a day to a vacation to make it worth it? Would the extra guests fill or expand the existing rooms at Disney’s hotels? Would the merchandise sales be profitable?

Even if Disney decides not to buy out Universal, all hope is not lost. It might be possible for Disney to build a Marvel themed hotel at WDW and not violate the ‘theme park’ rule… but if Disney wants to try and recover the rights to Marvel’s characters in Orlando, it will have to play nice for a while.

What do you think Disney should do?