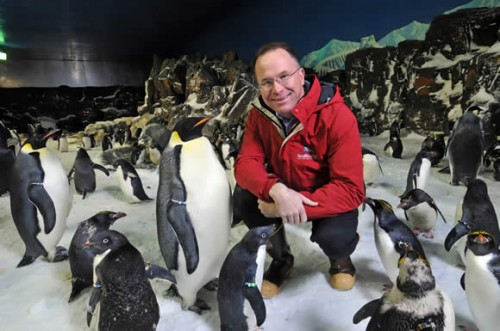 From Busch Gardens Parking Lot Attendant to President & CEO of a major themepark and entertainment company, Jim Atchison has had quite a rise. He’s also a real nice guy who wants nothing more than success for the employees of his parks and a day of world class entertainment for his guests. He’s flown a bit under the wire until the recent IPO of SeaWorld Parks & Entertainment. But now he’s finally getting his due.

Take this interview with FOX Business:

“I really crave that (interaction),” he said. “…to be involved in the business and get close to the guests, the guest experience, finding out the best things about their day, how they bought their tickets, what their intents are to return…I walk our parks regularly. I spend a lot of time in our parks.”

That’s exactly the sort of quote fans love to hear from theme park management. Lots more detail about Jim’s career and where the company is going in the interview.

I first met Jim at the announcement of SeaWorld’s expansion into Dubai. He was personable and friendly and stayed to talk with everyone who wanted a moment of his time. Alas, that project was sunk by forces outside SeaWorld’s control. He then had to deal with the transition from ownership by an international alcoholic beverage conglomerate to a giant private equity group. But SeaWorld clearly took advantage of that extra infusion of cash to improve its parks and to formulate a plan that would carry the company through to a new brand that included entertainment options that helped expand the SeaWorld experience beyond the park gates.

Jim deserves a lot of the credit for creating and leading the team that will take SeaWorld into the next 50 years. They do intend to play with the big boys. For instance, SeaWorld & Busch Gardens just raised their admission prices, following announcements from Universal and Disney that their prices were increasing. That’s the game that SeaWorld will have to play if it wants to continue being a world class entertainment choice.