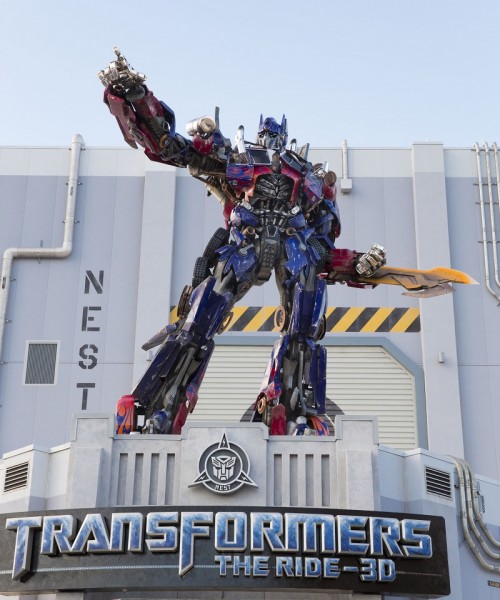 Today was the first day Optimus Prime was revealed atop his perch on the new Transformers: The Ride – 3D at Universal Studios Florida. Autobot leader Optimus Prime stands guard at 28 feet tall and weighs nearly nine tons, beckoning recruits to join the resistance against the invading Decepticons. But that giant addition wasn’t enough for the park, they also had to soft open the attraction allowing a steady steam of guests to board for the first time. If early feedback is any indication the Orlando version is even better than the Hollywood one.

The mind-blowing, action-packed thrill ride, which was constructed in record time (less than 11 months), officially opens June 20 at Universal Studios Florida. While the ride did have a technical rehearsal yesterday, there is no guarantee that it will be open if you visit before June 20th. June 9-16, Universal Passholders will be able to enter the park early (between 8AM and 9AM) for an exclusive ride on Transformers.

Take Harry Potter, the Transformers, Despicable Me, and an expanded Simpsons area and Universal Studios Florida has really upgraded itself over the last few years. Don’t forget that Islands of Adventure has finally started to show its potential too. Are you looking forward to your next visit to Univeral Orlando Resort?