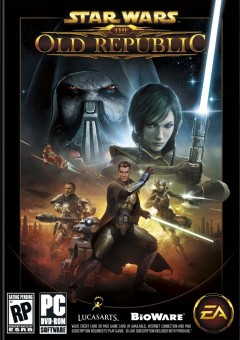 Hang on to your lightsabers…. Electronic Arts has just been announced as the exclusive license holder for core Star Wars games on console, PC, mobile, and tablet devises. Disney Interactive will focus on delivering new Star Wars games for casual audiences on mobile, social, tablet, and online gaming platforms. EA will collaborate with the creative teams at Lucasfilm to provide audiences with all-new gaming experiences set in the ever-expanding Star Wars galaxy. I guess this means Star Wars: The Old Republic has some life in it yet.

Shortly after their purchase by Disney, Lucasfilm shuttered their LucasArts game division. Many believe the action was a result of corporate Disney policy to outsource what are not core competencies in Burbank. But I’ve also heard that Lucasfilm President Kathleen Kennedy has been given wide latitude, similar to how Marvel and Pixar are managed by their respective heads, and the decision was hers.

“Our number one objective was to find a developer who could consistently deliver our fans great Star Wars games for years to come,” said Kennedy. “When we looked at the talent of the teams that EA was committing to our games and the quality of their vision for Star Wars, the choice was clear.”

“This agreement demonstrates our commitment to creating quality game experiences that drive the popularity of the Star Wars franchise for years to come,” said John Pleasants, co-president of Disney Interactive. “Collaborating with one of the world’s premier game developers will allow us to bring an amazing portfolio of new Star Wars titles to fans around the world.”

“Every developer dreams of creating games for the Star Wars universe,” said EA Labels President Frank Gibeau. “Three of our top studios will fulfill that dream, crafting epic adventures for Star Wars fans. The new experiences we create may borrow from films, but the games will be entirely original with all new stories and gameplay.”

EA is based out of central Florida, which might allow for some new synergy to happen with the parks division, who knows. However, EA was also recently voted the “worst company in America” by readers of Consumerist, a consumer watchdog website, for the second year in a row. Disney will have to keep a close eye on EA to make sure another customer service debacle, like the one that recently beset Sim City’s latest relaunch, does not set the dark side of the force on potential profits and fun for Star Wars fans.

Should the fact that this was announced on “Revenge of the Sixth” day tell us anything? What do you think? Has Star Wars gaming been given over to the dark side?