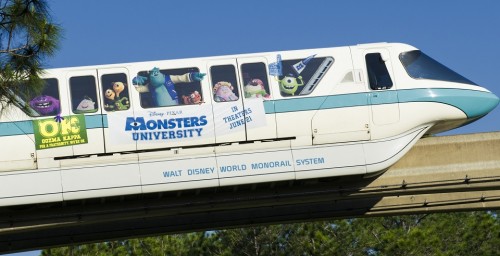 Monsters University Monorail at Walt Disney World is now rolling along the highway in the sky Monorail tracks. At first it was just on the resort or magic kingdom loops, but it has also been seen on the EPCOT loop. It’s one part of Disney World’s Monstrous Summer that guest’s already get to enjoy.

The themed monorail which features Mike, Sulley and a few of their classmates from Disney-Pixar’s new movie “Monsters University” made its debut April 24 on the Magic Kingdom Park/Resorts loop. All part of the movie promotion efforts for the film which debuts on June 21st.

I like to see this sort of synergy in the parks. Reminds me of the old days at Disneyland when movies were frequently promoted in the parks.

previousOnce Upon a Time 2-20: The Evil Queen
nextMickey and the Magical Map stage show coming to Disneyland