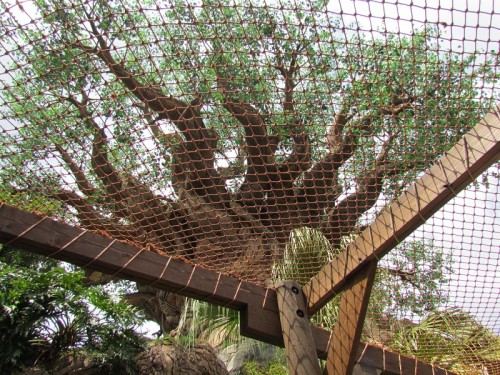 Sadly, the Tree Of Life hasn’t made it to its 15th anniversary without some safety issues, resulting from dropping ‘branches’

As Disney’s Animal Kingdom gets ready to celebrate its 15th anniversary, we’re getting a little retro here on The Disney Blog. We’ve looked at some favorites of days gone by – Journey into Jungle Book, The Tarzan Rocks Show, Pocahontas and her Friends, the first parade, and the Discovery Boats. But the central icon of the park is one of the park’s real accomplishments.

To be a park icon it had to be big, so Imagineers set out to find a structure that was big enough but would also support the weight of all the leaves and framework. They decided to use the basic structure of an oil derek and then modified it a bit to work with their plans. Here’s how it all went down, er up.

325 unique animals ‘carved’ into that tree. I can never seem to count them all.

Btw, if you’re planning on attending the 22nd for the 15th anniversary itself. Please note that Imagineer Joe Rohde is not longer attending. Disney has updated the schedule and it no longer includes him on the list.