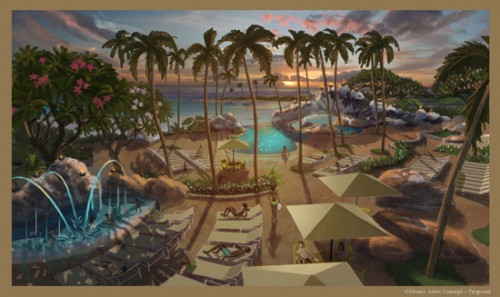 Disney has a hotel in Hawaii. Do you remember? It’s reportedly the best hotel in the Disney chain. But event the best Disney property doesn’t come out of the gate in perfect form. There’s always a period of what Imagineering calls “Test and adjustment.” Sometimes the adjustments are pretty major.

Work on Aulani’s adjustments began last fall and are scheduled to be completed later this year. They’re addressing some deficiencies in the pool area, eating, and entertainment. If you want to keep up with the changes, you’re in luck as Disney by Mark has been keeping an eye on things from his perch in Hawaii. Of course, if you’re there right now, stay out of the water… there’s been a sewage spill.

One of these days I hope to get over there myself, but until then. Thanks to Mark for keeping us updated. In the meantime, do you think Disney should stop with Aulani or should they open more hotels independent of the parks now that the economy has started to recover?